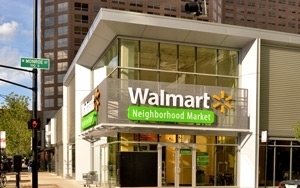 In a presentation at the Raymond James Institutional Investors Conference in Orlando, Fla., which was webcast, Simon explains that the retailer is using its Neighborhood Market and Walmart Express formats to create a new kind of “fully tethered retailer,” offering consumers all the possibilities of e-commerce with the convenience of a physical store, including such innovations as grocery delivery, drive-through grocery pickup, and storage lockers.

“We are using these formats so shoppers can order groceries and maybe a snow shovel online, then pick it up on their way home, when they are stopping to gas up at Walmart anyway,” he says.

It’s not that Walmart Supercenters are going away. “We expect the supercenter to remain vital. It’s a powerful beast. And they perform really well on the weekly stock-up occasion, and we have the ability to flex prototypes.” Those stock-up trips, which account for about 60% of U.S. grocery spending, are a $585 billion market, where Walmart has about 25% market share.

But the problem is that Walmart has fallen behind on fill-in shopping trips, as many smaller competitors, including dollar, drug and convenience stores, have proliferated. “Our growth has been interrupted by the rapid growth in these smaller stores.” Walmart has a roughly 10% share of that $415 billion market.

With the expansion of Neighborhood Markets, first launched in 1999, and the newer Walmart Express, “we now have an opportunity to really make an impact in this area.”

These stores are hybrids, he says, “designed to not only compete in grocery but also across a much broader space, including fresh foods, fuel and pharmacy.” Nor do they seem to cannibalize sales from larger Walmarts. “Data shows we are capturing new sales, new dollars and new trips when we put these stores in.”

But what makes the concept powerful, he says, is combining the smaller stores with the power of its e-commerce capabilities.

With Walmart Express, “it is a full-capability store, with fuel, pharmacy and fresh foods,  and it is all right in your zip code. Because of the breadth of the product offering and the connectivity, we are building a competitive advantage against all spectrums of retail, from pure physical to pure digital.”

He says the company’s first “fully tethered” units will come online May 2 in Denver, followed by San Francisco. Its pick-up grocery service, which has been testing in 11 stores in Denver, has resulted in a 90% customer satisfaction level.

These, based in part on what it has learned from its ASDA stores in the U.K., aren’t just connected in terms of e-commerce, but also by staffing, distribution  and stocking as well. “For example, we think we’ll soon have associates who may choose to work a few days a week in a supercenter, but then a few days a week in a smaller store closer to home.”

He says plans call for a doubling of its small store growth in the coming fiscal year.

“We’re excited about this growth,” he says, “because these hybrid stores provide the ability to compete with a wide array of competitors. There’s no need to go to a drug store, or a dollar store, or a grocery store. They are all Walmarts, and all connected, from the smallest store to the digital realm.”

Separately, Walmart says it recently acquired digital recipe start-up Yumprint, a start-up that publishes recipes from more than 2,000 blogs and Web sites. Given Walmart's sophisticated use of mobile in-store, the deal could highlight some bigger partnerships between the retailer and its CPG brands.