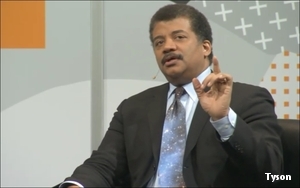 Astrophysicist and science media star Neil deGrasse Tyson is an expert on the physical universe, but he demonstrated some insights about the branding universe Saturday during a keynote conversation at the SXSWi festival in Austin. The brand he shed new light on was retail giant Macy's.

Speaking about the need for Americans to become more questioning, skeptical and scientifically minded, Tyson shared a longtime wish he has had about Macy's trademark branding event. the Macy's Thanksgiving Day Parade.

Tyson -- whose office is located in New York's Museum of Natural History, which is adjacent to the Upper West Side neighborhood that is the staging area for inflating the parade's giant balloons the night before the parade -- has often watched them being inflated.

“Macy's is the second-largest consumer of helium in the world,” Tyson noted, “for those balloons. In the old days they'd let the helium go back into space, now they recycle it.”

Interesting observation, but other than making SXSWi attendees wonder who the No. 1 consumer of helium is, it was difficult to see where Tyson was heading with his anecdote -- until he pointed out that it was actually not at the beginning of Macy's parade, but at the end, where the retailer illuminates a giant neon sign with one word on it: “Believe.”

It was that word that got Tyson to take to Twitter and tweet a suggestion that one year Macy's should replace it with the word “Question.”