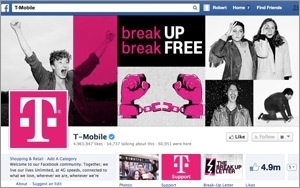 Competition breeds innovation, and few markets are more cutthroat than telecommunications. As a result, phone carriers like Verizon and T-Mobile are setting a new standard for customer service, or at least on social channels like Facebook.

In February, the four most “socially devoted Facebook brands” were all phone carriers, according to new data from social analytics firm Socialbakers.

“The brands with the highest fan count aren’t necessarily the ones that are engaging the most with their fans,” Michaela Bránová, data analyst at Socialbakers, said on Tuesday.

“Traditionally, there is a high social-care demand for brands in the telecommunications industry -- they receive a high volume of fan questions and in-bound requests on social media channels,” Bránová explained. “It’s interesting to see that these brands are beginning to meet this demand, as all the top U.S. brands in social care are from the telecom industry.”

Engaging consumers on social channels is another story, however.

Measured by followers alone, the most popular brands on Facebook remained Walmart (with over 32 million fans), Amazon (with nearly 22 million fans) and Target (with north of 21 million fans).

Overall, “the biggest industries we’re seeing by sum of fans on social-media pages are in the consumer-goods space,” Bránová said on Tuesday. “We see this reflected by the top Facebook brands by followers.”

In February, no single post received more attention than CVS’ decision to stop selling tobacco in all of its 7,600 stores by Oct. 1, 2014.

Bud Light’s picture of a digital clock that reads, “BEER:30” did pretty well, too -- and likely attracted a far more possible response that CVS’ announcement. During February, the post drew 360,000 interactions -- including 246,000 likes, more than 5,000 comments and about 100,000 shares -- which equated to an engagement rate of nearly 5%.