Adform notes in the report that “publishers are offering greater amounts of Rich Media inventory” via ad exchanges, and the company believes this will entice brands to use RTB for campaigns more often.

Perhaps publishers are offering more inventory via exchanges because the CPMs continue to increase. According to the report, publishers saw a 15% jump in CPMs from Q3 to Q4 and a 67% jump on the year as a whole. 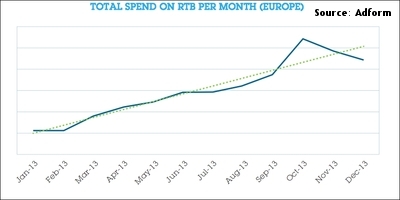 “Higher CPMs will attract more publishers to participate in the real-time markets,” the report reads, and “will justify” involvement in exchanges. This echoes what The Weather Channel’s VP of programmatic, Jeremy Hlavacek, said at OMMA RTB last month.

Mobile and tablet inventory accounted for 13.75% of all RTB impressions Adform saw in December 2013, compared to just 2.65% in January 2013. Adform expects mobile RTB to account for roughly 20% of all impressions in Q1 2014.

europe, real-time, rtb
1 comment about "RTB Spend In EU Up 366% In 2013".
Check to receive email when comments are posted.
Next story loading