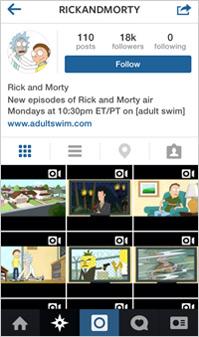 Can TV programmers really shave 22-minute episodes into 15-second Instagram vid-clips? Well, you know someone had to try it sometime.

The idea is not entirely new. Mobile veterans will remember an experiment in m-video circa 2006 from early player mSpot. Predominantly, music service mSpot was among the first companies to try mobile movies for cell phones. In an exercise that seemed a bit laughable at the time, they parsed full-length feature films into 3- and 5-minute pieces that were designed for on-the-go scenarios where you wanted to grab another five minutes of that two-hour feature while waiting on a bank line. Or so was the mythology surrounding mobile media use back in the day.

Now that we know how much long-form video consumption is going on in lean-back mode at home, the on-the-go model no longer informs all things mobile. But now the novel formats of mobile social media (nano-vids) probably have more to do with a mobile style of content rather than bandwidth or attention span necessity.

Within that context, Cartoon Network launched an experiment in nano-video programming on Instagram. They cut down to 109 15-second Instagram segments a full 22-minute episode of the cartoon sitcom “Rick and Morty.”

It is a stunt, of course, but it actually works in an odd way. As you scroll through the snippets, each 15-second clip has an added bit of tension as you wait for the next piece to load. If a wonky connection were causing this persistent interruption to the narrative flow (infernal buffering) it would be unwatchable. But having the pauses built into the experience results in a unique effect.

I am guessing that this is part of the Cartoon Anything app project the network announced last week. Fifteen-second content is supposed to be part of the final mix in the app.

Presumably the super-short programming CN is planning for the app will be more sculpted and self-contained than these Instagram experiments. They have done a good job of finding the little breathing spaces where splices can be made. Arguably, this delivery mechanism focuses attention on every moment in a way we don’t likely attend a flowing narrative. And you can reach back even further into media history to find a curious precedent to this in sequential roadside signage. The famous Burma Shave out-of-home gimmick of the 1920s has drivers encounter sequenced lines of marketing poetry that added up to a complete message. “Your shaving brush / Has had its day / So why not / Shave the modern way / With / Burma-Shave.” That sort of thing. Instagram and Vine, all social media feeds, for that matter, seem almost tailor made for that kind of creative narrative unfolding on one’s drive-cum-scroll down the mobile virtual highway. I wonder if some waggish innovator even will try to create long-form stories out of 15-second snippets at some point?

What am I saying? This is the Internet. Of course someone will try this…sooner rather than later…and seed funded by some entrepreneur celebrity.