On Syfy, Will 'Big Ass Spider!' Be Another 'Sharknado'? 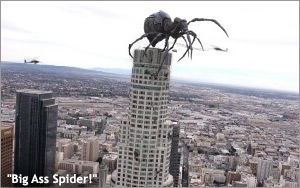 One of the most memorable media sensations of Summer 2013, at least as far as television was concerned, turned out to be a Grade-C monster flick produced by the network that specializes in same -- Syfy’s “Sharknado.” Everybody seemed to know about this movie by the end of its first telecast on July 11, 2013. There was instant demand for multiple repeat presentations. It was even a standout property at the annual San Diego Comic-Con, where it seemed to be generating as much buzz as any of the multimillion-dollar movies and television shows on grand display.

“Sharknado” had premiered only one week before the Con -- too late for Syfy, which had been caught completely off guard by its instant and massive popularity, to do much more than assemble a street team of young people to walk around San Diego’s Gaslamp District carrying surfboards emblazoned with the movie’s title treatment and with giant shark bites taken out of them. But that didn’t stop “Sharknado” fans from devising their own shark-themed costumes and strolling around the massive convention center, giving the network lots of free publicity.

“Sharknado,” of course, became the instant phenomenon that it was largely because of all the tweeting that went on during its first telecast, especially by such television luminaries and geek faves as Damon Lindelof and Will Wheaton. This was -- for better or worse -- one of the first clear examples of Twitter having a profound influence on television programming. A limited -- and unprecedented -- theatrical release followed.

Well, the inevitable sequel, “Sharknado 2: The Second One,” will premiere on Syfy on July 31 -- right after this year’s Comic-Con (July 24-27), allowing for maximum publicity and promotion and further converting of the converted. It remains to be seen if lightning will strike twice. I suspect it will. In “Sharknado 2,” a tornado full of sharks touches down in New York City, giving new meaning to the phrase “the Great White Way.”

In the meantime, Syfy yesterday announced that another flick with an equally tantalizing title -- “Big Ass Spider!” -- will premiere on the network on Saturday, April 19. This is not a Syfy Original Movie -- it had a limited theatrical release by Epic Pictures last October and came out on DVD in January -- but I suspect it will be mistaken for one by much of the interested television audience. It really doesn’t matter, because with a title like that it can’t help but attract the “Sharknado” crowd and regular viewers of the network’s cheese-tastic original movies, the modern equivalent of the triple billed drive-in monster flicks of decades past.

Also working in favor of “Big Ass Spider!” becoming a big success for Syfy in its premiere and subsequent showings is the fact that at the time of its theatrical release it scored a highly respectable 78% on RottenTomatoes, the only movie appeal metric that matters, as any millennial will tell you. And it has been nominated for a 2014 Saturn Award as Best DVD Release.

The storyline for “Big Ass Spider!” all but guarantees another Hollywood-fueled Twitter blast on April 19: A giant alien spider escapes from a military lab and terrorizes Los Angeles. Greg Grunberg and Ray Wise star, adding to its instant genre appeal.

I haven’t seen “Big Ass Spider!” but if it garners respectable ratings for Syfy it won’t surprise me to hear that the network is developing a sequel or, even better, a monster mash-up. “Big Ass Spider vs. Sharknado!” Can you imagine? How can that not happen?