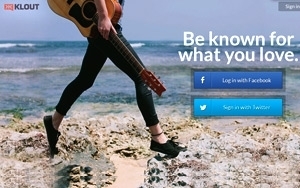 Lithium Technologies is buying Klout, the social marketing firm is expected to announce on Thursday.

An acquisition price could not be confirmed on Wednesday, but was previously reported to be in the range of $100 million.

Lithium is scheduled to host a press conference on Thursday afternoon in San Francisco to announce the news.

It is not exactly clear what Lithium has planned for Klout, but the merger is expected to result in a substantial upgrade to Lithium’s existing platform.

Thanks to good press, self-promoting influencers, and a partnership with Microsoft’s Bing search engine, Klout was once the “social scoring” start-up to beat. Over the past year, however, Klout’s stock fell as the accuracy of its rankings came into question, while marketers have cooled to the general practice of “social scoring."

Asked whether they found such services useful for finding “influencers,” a majority of marketers (55%) said “no,” according to a survey of about 1,300 marketers released last year by Sensei Marketing and the consultants at ArCompany.

“The majority of marketers surveyed … stated they either distrust the metrics reported by social-scoring platforms or that they’ve had little success using them,” Sam Fiorella, partner at Sensei Inc., a Toronto-based consulting firm, said at the time.

Shifting directions slightly, Klout teamed up with Mass Relevance late last year to help broadcast networks and publishers get more out of Twitter.

Lithium has handled social duties for a long list of clients, including The Home Depot, Sephora, Best Buy and Verizon.

Analysts say the social management market is ripe for consolidation. In fact, over the next 24 months, the number of social-leaning vendors and agencies will shrink from roughly 200 to less than 24, according to Mukul Krishna, digital media industry analyst at Frost & Sullivan.

“Consolidation is definitely needed -- and definitely happening,” Krishna recently told Social Media & Marketing Daily. “The market is extremely fragmented and filled with vendors and agencies promising to manage everything, which is B.S.”

Lithium Technologies declined to comment for this story, and Klout could not be reached by press time.