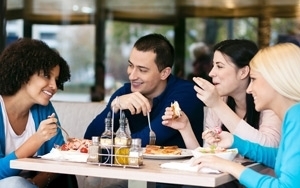 Many restaurant brands need to market their loyalty programs more clearly in order to drive greater awareness and participation, strengthen connections with consumers and drive more trips and orders, according to a new survey by Deloitte Travel, Hospitality and Leisure (THL).

Judging from this study's results, many may also need to work on making their social media platforms and mobile apps more engaging.

To study methods for building consumer loyalty in the fast service and casual dining sectors, THL commissioned an independent research firm to survey 4,093 QSR, fast-casual and/or casual dining restaurant customers. (The downloadable report summary shows their self-reported frequencies of patronizing these restaurants and other respondent and methodology information.)

Just 25% of respondents said they consider loyalty programs when choosing a restaurant. Asked to rank (on a five-point scale) various attributes as to how important they are in terms of what they value in a restaurant experience, 23% ranked loyalty programs as "not important" and just 8% ranked them as "very important."

Half of respondents said that they belong to at least one restaurant program -- which might sound encouraging, but not when compared to membership rates for loyalty programs in sectors such as airlines (78%) and hotels (70%).

However, among the 26% who indicated that their favorite restaurant does offer a loyalty program, 87% said they are members.

A key takeaway is that although restaurant loyalty program participation is lagging, these programs can drive value if promoted effectively, as a restaurant’s most frequent patrons are more inclined to join that program and use it more than any other, says Scott Rosenberger, principal, Deloitte Consulting LLP and Deloitte’s U.S. consulting travel, hospitality and leisure leader. The study also found that core customers who do belong to their most-visited restaurant’s program "are more satisfied customers and stronger brand advocates than those who do not," he reports.

The survey confirmed that delivering the basics is job number one. Out of 23 attributes, respondents ranked food taste, food safety, order accuracy and price as the top four in importance (in that order) in their restaurant experience.

At the same time, the results confirmed that grabbing greater share of customer dollars calls for improving connections with customers through a combination of in-restaurant interaction with staff, digital interaction with the brand and loyalty programs with strong value-added propositions.

Attributes such as responsiveness and friendliness of staff ranked high (fifth and eighth out of 23 attributes, respectively) in terms of importance to the restaurant experience, and relatively high in terms of repeat patronage (eleventh and tenth, respectively). But only a third of respondents felt they had developed a personal relationship with their favorite restaurants’ brand and people.

Just 42% of respondents said they would be willing to serve as brand ambassadors for their favorite restaurants, and 61% said that they "never" or "rarely" want restaurants to contact them for personal feedback.

Higher percentages of respondents indicated that they are "sometimes," "often" or "always" willing to interact with restaurant brands through email or traditional direct mail, but much smaller percentages reported that have actually had interactions with restaurants through these channels -- perhaps pointing to untapped opportunities by brands.

In addition, just 19% of respondents reported having downloaded a restaurant brand's mobile app.