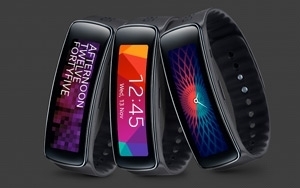 Fresh rumors are blowing in that Apple is preparing to introduce its long-rumored iWatch device sometime in the third quarter. That comes from BGR, by way of Chinese-language Economic Daily and Taiwan-based electronics news site DigiTimes, that not-so reliable but frequent predictor of Apple product launches.

Even so, assuming Apple makes its entrance into the wearables market this year or after, the reports raise the question of what impact Apple will have on the emerging landscape. At least in the smartwatch and digital fitness segments, a host of competitors already await, from startups like FitBit to Nike’s FuelBand to chief rival Samsung.

Samsung’s Gear Fit -- the update of its Galaxy Gear smartwatch launching April 11 -- is earning strong early reviews, with analysts and gadget enthusiasts highlighting its aesthetic appeal as much as its functionality. Consumer Reports even called it “pretty” in a write-up Tuesday.

And Ryan Martin, an associate analyst at Yankee Group, suggested the upgrade indicates Samsung is serious about conquering the wearables market. “It’s clear that Samsung has earmarked the wearable technology market as a latent opportunity moving forward. Its latest round of devices, including the Gear Fit, demonstrate the company’s desire to build on its first-mover status,” he wrote in a new report.

So where does that leave Apple? It has never been known as a first-mover but that didn’t matter when it came to the music player, mobile phone or tablet markets. Its strategy has been to launch products that leapfrog what’s already out there or what came before. That said, Samsung has proven it’s more than a worthy adversary, so Apple won’t necessarily steamroll the competition.

Still, for a company renowned for technology design and innovation, the wearables market should be right in Apple’s wheelhouse. Consider an NPD Group survey released during CES in January that underscored the importance of visual appeal in wearables.

“Design has always been a key motivator for technology purchases, but for wearable devices there is a greater focus because the devices are worn externally,” noted NPD analyst Ben Arnold at the time. That should be music to Tim Cook’s ears. The wearables opportunity offers Apple a chance to define the state-of-the art in a new product category and regain some of its lost cachet from Samsung.

Apple also has the advantage of operating a network of network of retail stores to showcase what would be a first-time purchase for many people. The company, in typical fashion, hasn’t given away much as to what it might release or when. Cook told The Wall Street Journal in February that Apple is working on devices that a “reasonable” person would consider new product categories.

“We’re not ready to talk about it, but we’re working on some really great stuff,” he said. Whether the company can deliver on that promise remains to be seen. But customers and investors will expect it if Apple is taking wearables as seriously as Samsung.