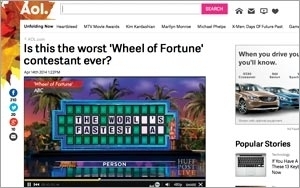 Continuing its month-long NewFront parade, AOL.com on Tuesday is expected to roll out out a new video strategy, along with a slate of new programming partners.

Building upon its On Network, the site's new mission is to keep video offerings fresh, with around-the-clock updates, and hourly programming blocks similar to that of traditional TV.

“Video has become too important to our viewers to set [a programming lineup] and forget it,” Maureen Sullivan, president of AOL.com, said on Monday.

The company is also launching an expert network, which will feature original fare from fashion gurus like Rachel Zoe and Tim Gunn, as well as offerings from other personalities, like ex-athlete Tiki Barber and model and actress Molly Sims.

Brand new content will include a “Deal of the Day” from HSN; “WWE Inbox,” inside look at top WWE fighters; ESPN’s “Not Top 10 List” sports blooper reel; and  “Vogue In Motion” from Conde Nast, a behind-the-scenes look at a Vogue editorial fashion shoot.

The terms of each partnership are unique, but all parties will share in the resulting ad revenue, Sullivan said. The shift is part of AOL’s ongoing investment in quality, advertiser-friendly video offerings.

Expected to debut later this year, "Connected" is part of the AOL On Network’s new slate of programming, which will be unveiled during AOL’s official Digital Content NewFronts presentation on April 29.