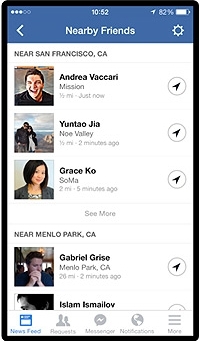 What’s next for Facebook now that it has facilitated nearly every virtual connection possible? Connecting people in the real world.

That’s the idea behind Nearby Friends -- an optional feature Facebook plans to add to its mobile app within the month, which will challenge existing services like Foursquare, Google's Latitude, and Apple's Find My Friends. Facebook has been working on the feature since it acquired Glancee -- a since-shuttered mobile app that helped users discover people nearby -- in early 2012.

“We think there is a lot of value in being able to share with your friends if you are nearby them ... and know if they are nearby you,” a Facebook spokeswoman said on Thursday.

At the moment, Facebook has no plans to use such geographic insights to target advertising, the spokeswoman said. Nearby Friends does not work for Pages,” she said -- so brands can’t easily user the feature to track the location of users.

If and when users turn on Nearby Friends, they will only “occasionally” be notified when their Facebook friends are nearby, Andrea Vaccari, a product manager at Facebook (and Glancee co-founder) explained in a blog post on Thursday. Putting an emphasis on privacy, Vaccari stressed the fact that users can choose which friends can see their geographical whereabouts.

“You and your friends both have to turn on Nearby Friends and choose to share with each other to see when you’re nearby,” he made clear. The new feature also lets users share their precise location with particular friends for a set period of time.

Nearby Friends is not all about friends who are nearby, however. When possible, Facebook is also encouraging users to engage with personal connections, based on their current geographical location, regardless of their own personal proximity. “When you see a friend visiting a place you’ve been, it’s the perfect opportunity to send a recommendation for a great restaurant,” Vaccari suggested.

Given Facebook’s huge size, that suggestion should be concerning for any location-based social network and Foursquare in particular.

But Web watchers attribute Foursquare’s growth to a shift from reward-based friend-tracking to Yelp-like local business listings and reviews -- a position that Facebook is clearly challenging with Nearby Friends.

As Crowley recently told ReadWrite.com: “The simple act of ‘checking-in’ … does more than alert followers to where you are -- it creates a data point that contains significant personal information about you and the businesses you patronize.”