Smaato noticed a substantial increase in demand during Q1 2014 compared to Q4 2013. The company says the total number of auctions increased by 132% quarter-over-quarter. Additionally, the number of bid responses (demand) increased by 73%. 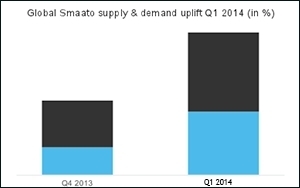 There was a slight decreased from Q4 to Q1, although ad spend in general typically decreases post-holiday.

Last quarter, the U.S. accounted for two-thirds of the spend on Smaato’s exchange, which is exactly how much it accounted for in Q4 2013. Smaato says the UK and Italy were its two largest spenders in the EMEA region, respectively, although neither accounted for more than 7% of total spend on the exchange.

Turkey (up 225% quarter-over-quarter), South Africa (up 190%), Brazil (104%), Mexico (88%) and Spain (77%) are highlighted as countries quickly adopting mobile RTB. This was Brazil’s second straight quarter with a triple-digit spend increase over the previous quarter; from Q3 to Q4, spend in Brazil increased 440%.

Smaato says interest for app inventory grew considerably in Q1. Globally, the company said there was 73% more demand for in-app inventory, which led to 109% more auctions compared to Q4.

Entertainment & Media accounted for 37% of the global spend on the exchange, and advertisers in that category spent 97% more in Q1 than in Q4. Technology & Telecom (24%) and Business & Finance (11%) were the second- and third-highest spending sectors, respectively.