Labels Matter For Publishers In Programmatic

I was raised to avoid using labels. Describing people, countries, and companies with broad descriptions that can border on stereotypes, positively or negatively, can be very dangerous and inappropriate.

I was also raised in a middle-class family, so labels also sometimes meant something that was unnecessarily more expensive, like a polo shirt that sold for an extra $15 seemingly just because it had an alligator on the front pocket. As I got older, I came to learn that some labels are there because there is a very valuable difference in quality, justifying that higher price.  And labeling a brand matters.

In today’s world of programmatic buying and selling, and more specifically in the expanding world of private exchanges, labels are critical. My first private buy with a specific publisher was back in early 2011 when I ran media and data at [x+1]. While certainly many areas of the exchanges and the buyer/seller sophistication have improved, the large majority of liquidity among all of the top six exchanges, at least in the U.S., comes in the open auction marketplace.

Before, during, and since running global programmatic advertising at The New York Times, I have used the analogy of the retail store a ton in describing today’s differences between open and private.

Take a look at this picture: 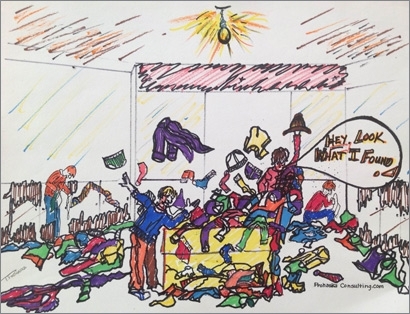 Here is today’s open exchange. Customers don’t know the name of the store (the publisher’s name) when walking in, or who makes the products they are rummaging through, or how many shirts there are vs. shorts vs. socks, and how much anything costs. All they know is that it’s cheap, and there are plenty of great deals to be had. Every once in a while (by doing just a little URL tracking) buyer can find a top-tier publisher impression at the bottom of that cardboard box and tell their colleagues, “Hey, look at what I just found – great Publisher X for 90 cents CPM.” If it’s an ad network, in any form, doing the buying, usually the response internally is something like, “Great! Put that on a screenshot showing our client’s ad on their site and tell them we can get them sites like X for just $2.” Never mind that it’s maybe one impression out of the 5 million bought that day. That buyer just put his client on that site. Big win for the buyer.

Now take a look at this picture: 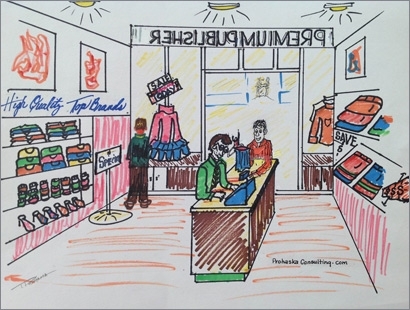 This is what more and more publishers are doing through private exchanges, now that exchanges are getting better at allowing publishers to leverage their platforms more. As many know, much of the programmatic tech was built out for the buy-side first for years, with publishers sometimes intentionally not included in the tech resource allocation and priority in exchanges’ product roadmaps. Now, publishers are able to put their name proudly on the storefront. They organize their inventory into various categories so a buyer knows where to find everything. They put a salesperson at the front and at the cash register, so someone has a personal relationship and experience the whole time s/he is there. And they label the items, so you know which ones are 100% cotton, or size XL, or blue, or available right now for $18. Think about the two different shopping experiences you would have walking into each of these stores in your local mall, if it’s hopefully still there. The same differentiated experience is happening right now among programmatic buyers on the major exchanges.

Notice one other subtle difference about the two stores: there are currently more customers shopping in the open than in the private exchange. I believe this will change over the next 12 months as more publishers get their integrated programmatic sales efforts going and place more inventory in the private exchanges labeled appropriately and proudly.

Change is obviously happening quickly in programmatic -- and, as a result, all digital media buying and selling, especially among new trends such as programmatic guaranteed and various flavors of “server-to-server” integrations with major advertisers and platforms. We’ll look to dive more into those areas in future columns. But over the last 18 months and probably next year, the largest trend continues to be publishers moving their inventory more aggressively into exchanges overall, and creating deal structures around private exchanges, labeling their inventory and audiences more accurately than ever before. And as a result, more buyers are seeing today’s programmatic storefronts going from this to this.

programmatic, rtb
1 comment about "Labels Matter For Publishers In Programmatic".
Check to receive email when comments are posted.
Next story loading