Toyota To Leave California For Texas 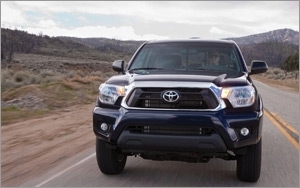 Nissan left Los Angeles for another entertainment capital in 2006, and now Toyota has confirmed rumors it is preparing to fold up its tent and head for Texas.

To wit, Dallas gets the North American operations of Toyota Motor Sales. The automaker says that over the next three years it will move some 4,000 people to the new North American headquarters for manufacturing, sales and marketing, and corporate operations in Plano, near Dallas.

The official word from North American CEO Jim Lentz is that it helps consolidate the company’s operations. “With our major North American business affiliates and leaders together in one location for the first time, we will be better equipped to speed decision making, share best practices, and leverage the combined strength of our employees."

Unsaid is that, at least in part, the money is talking. After all, one reason Nissan left and others have set up shop in the South is because southern states have provided generous incentives to lubricate manufacturing and corporate development. Besides Nissan, BMW, Volkswagen, Kia, Nissan, and Mercedes-Benz have all been active in states like Texas, Georgia, Tennessee, Virginia, and South Carolina. Toyota manufactures its Tundra pickup truck near San Antonio.

“Toyota’s relocation from Southern California to Texas is part of a larger, ongoing trend driven by the high cost of doing business in this state. Everything from corporate tax structures to the cost of living is more desirable in states like Arizona, Nevada and Texas, and the ongoing migration of businesses out of California reflects it," said Karl Brauer, senior analyst for Kelley Blue Book, in a statement. "When Nissan left in 2006, it caught many in the industry by surprise, but at this point I’m wondering if we’ll see similar moves by Honda, Hyundai and Kia." He notes that Silicon Valley startup Tesla is looking elsewhere for its big battery-manufacturing investment.

Jesse Toprak, chief of industry analysis at Cars.com, says that besides the savings Toyota gets with the move, the company gets good synergistic benefits from having manufacturing near corporate leadership. And being in Texas also gives them talking points. "They can say they are a true American company located in heartland of the U.S.," he says, adding that it makes a difference where Toyota has needed a boost. "They know have done quite well on the East Coast but not as well in middle of the country; long-term their market share has been shrinking somewhat on the West Coast, and not growing a lot in the middle of the country."

He also points out that, strategically there's a culture created by manufacturing and administrative branches of the automaker being in close quarters. "Long term it's more cost effective to have everyone in one place."

Said KBB's senior analyst Jack Nerad, “Money – and tax incentives – talks when it comes to headquarters locations of large corporations." But some brain drain is likely as  some staffers won't want to trade L.A. for Dallas.

"While the dollar savings from the relocation should be fairly easy to quantify, what is much harder to quantify is the cost in business disruption and ‘brain-drain’ that such a move can cause. You can bet a lot of folks at Toyota’s headquarters right now are trying to keep their eyes on the business ball, while at the same time their personal lives have just received a sizable jolt.”

Toprak would agree that it's almost certain Toyota will lose some talent, even though Plano is definitely cheaper than Southern California. "That said, when Nissan moved only 40% came along, maybe less. So there will be some brain drain."

automotive, los angeles
1 comment about "Toyota To Leave California For Texas".
Check to receive email when comments are posted.
Next story loading