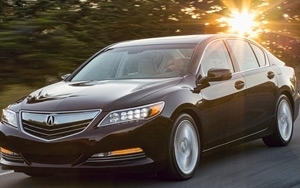 Acura doesn't just have a new car in the TLX sedan -- both a convergence and replacement for the TL and the TSX sedans -- it has a relatively new agency, Mullen, which last year introduced a new creative direction with the launch of the 2014 MDX SUV. And in March it got a dedicated marketing organization when Honda (finally) decided to cleave Honda and Acura. Mike Accavitti, who used to oversee marketing for both Honda and Acura brands at Torrance, Calif.-based American Honda Motor, became general manager of Acura, while former Acura head of sales Jeff Conrad became general manager of Honda.

Accavitti tells Marketing Daily that the new single-brand focus for him and Conrad makes more sense, although it doesn't necessarily make things any less challenging. "It's theoretically easier, but the breadth of my assignment is greater because it’s not just about marketing; I also have sales and service. But now I also have a singular focus on one brand, which is great."

He notes that until the separation of the brands in March, Honda and Acura brands had been marketed together under specific practices -- where, for example, social media and digital teams worked on programs for both marques. Honda was the beneficiary of that arrangement, and Acura not so much.

"We had been functionally organized, and when you have Honda selling 1.3 million vehicles per year and Acura 150,000, the natural tendency is to the higher-volume brand," he says. "Acura just wasn't getting the resources it required to take things to where it needed to be." He says that with Acura on its own, the company has the focus and resources to "Unleash Acura's potential."

The changes make North American EVP Eric Berkman the head of the new Acura Business Planning Office, a 10-member team. Accavitti says that structure includes a direct line from consumer insight to product development. "We now have a sales guy who reports both to me and to [Berkman]. This will be the conduit, the liaison between sales and customer feedback, so we are hard-wired now between product planning and sales. When the goal is to improve customer satisfaction this is how you really want to approach it: creating more avenues to get information from customers to development."

Accavitti says that with the TLX, which goes on sale this summer, helping to clarify the sedan portfolio (the ILX is the gateway car, the TLX the volume keystone, and the RLX  the flagship), the company will put a greater marketing focus on cars this year. "Now that we have solid sedan lineup we will work on communications. We are fortunate in this case because we have a really good car. From a marketer's standpoint it's what you want. A product you can really get behind."