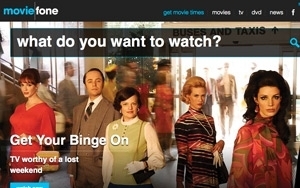 Citing a better way to search for TV programs, AOL and Whalerock Industries will “re-imagine” AOL’s big Moviefone Web site to include TV.

In addition to searching for movie showtimes and ticketing on Moviefone, consumers can now find a particular episode of a specific season of a television series -- whether on air, Netflix, Amazon, iTunes or elsewhere. This will eliminate searching through different TV platforms.

“The line between television and film content blurs more every day," stated Lloyd Braun, founder/chief executive officer of Whalerock Industries, a Santa Monica-based media and technology company. "Consumers have a dizzying array of choices in determining what and where to watch their favorite TV shows and movies.”

"We set out to answer a true market need by addressing the universal question: What do I want to watch, and where can I find it?” said Susan Lyne, chief executive officer of AOL Brand Group. “The new Moviefone is a simple and elegant solution to that challenge.”

Both Braun and Lyne worked together as senior programming executives at ABC.

Helping start up the effort will be a new Walt Disney theatrical release, “Maleficent,” in theaters May 30. The deal include co-branded media placements, custom creative and exclusive content on Moviefone.