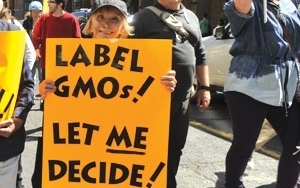 The Grocery Manufacturers Association (GMA) announced that in the coming weeks, it will file suit in federal court against Vermont to try to overturn the law.

Connecticut and Maine had already passed laws requiring labeling of genetically engineered (GE) or GMO-containing foods, but those were written to be triggered only when other nearby states passed GMO labeling laws. Vermont's is the first law in the U.S. not to include such a trigger clause.

The Vermont law requires food products sold in the state that are wholly or partially produced with genetic engineering to be labeled as such by July 2016, with penalties of $1,000 per day for violations. Meat, milk, medical foods and restaurant fare are among the foods excluded.

The law also specifies that foods containing GE ingredients can't be marketed as "natural" -- another hot button for food makers already facing a growing number of class action lawsuits based on allegations that their "natural" or "all natural" claims are misleading consumers. (Kellogg just settled suits that had been filed against the Kashi and Bear Naked brands on those grounds.)

The Center for Food Safety and other organizations working for GMO labeling called Vermont's law a major victory, and some predicted it will lead to passage of more such laws around the country.

Although the food industry and other opponents successfully defeated GMO labeling legislation in California and Washington, such bills are pending in at least 13 states.

GMA, which represents more than 300 food, beverage and consumer products companies, contends that the Vermont law is "critically flawed" and not in the best interests of consumers. "It sets the nation on a costly and misguided path toward a 50-state patchwork of GMO labeling policies that will do nothing to advance the safety of consumers," contends the association, adding that GM crops use less water and fewer pesticides, reduce crop prices by 15% to 30%, and "help us feed a growing global population of seven billion people."

GMA points out that the Food and Drug Administration, World Health Organization, American Medical Association and U.S. National Academy of Sciences have all found that food and beverages with GM ingredients are safe, and that U.S. consumers who prefer to avoid GM ingredients can buy the "certified organic" foods already in the marketplace.

"The government therefore has no compelling interest in warning consumers about foods containing GM ingredients," making the Vermont law's legality "suspect at best," the association argues. Instead, GMA backs proposed federal legislation, HR 4432, "The Safe and Accurate Food Labeling Act," which would require labeling foods with GM ingredients "if the FDA...determines that there is a health or safety risk."

On the opposite side, the Center for Food Safety and other pro-GE-labeling organizations support HR 1699/S 809, the "Genetically Engineered Food Right-to-Know Act," which would require the FDA to enact a mandatory federal GE labeling policy. These groups assert that HR 4432 (which they have dubbed "Denying Americans the Right-to-Know" or the DARK Act), is designed to block any federal or state actions requiring labeling of GMO-containing foods.

There's no doubt that mandatory labeling and the need to police that will raise manufacturers' costs, and many say that will translate into higher food costs for consumers. Makers say the costs will be particularly high if they re forced to comply with varying laws from state to state. Opponents of labeling, including The Washington Research Council and the Biotechnology Industry Organization, have estimated that it could raise annual food costs for typical households by $400 to more than $500.

The NPD Group recently reported that while only 11% of U.S. consumers say they are willing to pay more for non-GMO products, half say they are concerned about the safety of foods containing GMOs.

Rabobank senior analyst Nicholas Fereday recently wrote that the GMO issue "has started to move center-stage and will continue to gain momentum and prominence."

Speaking to Bloomberg News earlier this week, he said that while changing labels would be costly for food makers, changing their ingredients to avoid such labeling would be even more expensive -- and that either way, consumers will see higher food prices. Experts have also pointed out that non-GMO crops and ingredients sources are in many cases currently not plentiful enough to support producing products in large volumes.

If Vermont's law stands up, packaged foods makers are faced either with the costs of special labeling for that state or "writing off" doing business in the state, Fereday points out. The state's 670,000 residents represent just 0.2% of the U.S. population, but it's still a $750-million market for packaged foods.

Reformulating products to avoid GMO labeling (which carries a negative perception that will hurt sales, say food makers) in a single, relatively small state would not seem a unrealistic option. But if Vermont's law prevails in the court battles ahead, and federal legislation does not preempt states on this front, more states would presumably feel free to pass their own laws.

The food industry will no doubt continue to make huge investments in fighting such initiatives. Yet, as Fereday noted in an interview with FoodNavigator.com after the Vermont bill was signed into law, even if the legislative outcomes turn out largely in their favor, food makers might eventually decide that the tide of public opinion requires investing more broadly in reformulating products to be non-GMO.

"The 'We need to feed 9 billion by 2050' argument may play well to the Davos crowd, but does not appear to be moving the needle for key trendsetters: Millennials, mommy bloggers and foodies," he said. "The pro-GMO crowd needs to find a way to speak to consumers in a language and with a message they understand that addresses their concerns with GMOs."

Indeed, now that the whole GMO issue has become a public relations battle, more than a reasoned discussion of facts, the food industry's opposition to labeling is backfiring, because it's being perceived as having something to hide, asserted Maryellen Molyneux, president of the Natural Marketing Institute.

"So far," summed up Fereday, "the only clear winners are the organic food movement, and soon, the lawyers."

"Protesters in a rally with signs asking to "label" GMO's on food "photo from Shutterstock.