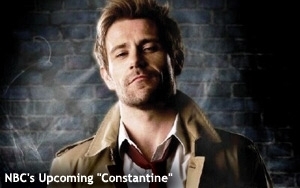 Upfront week officially begins this morning with NBC's deluxe presentation of its 2014-15 schedule at New York City's Javits Center. Except not really, because the excitement actually began yesterday afternoon when NBC sent out a highly detailed press release with all of the relevant information that it will repeat today.

NBC also posted all kinds of new season sneaks and peeks -- show descriptions, clips, photos, etc. -- on its various Web pages and social media platforms. But that was just the tip of the iceberg. Reporters, bloggers, tweeters and critics went wild in a sudden mad dash to be the first to spread the word. By yesterday afternoon, everybody with any interest in anything NBC will be offering next season -- including the supernatural drama “Constantine” (pictured above) -- could have easily consumed their fill, including members of the advertising community.

And so I must ask, what is the point of the traditional upfront week, with its presentations and parties and press conferences? Once upon a time it was a thrilling and informative experience, largely because the thousands of attendees at the broadcasters’ events really didn't know for sure what the networks were planning to do until the presentations played out. All most people had to go on were educated guesses by newspaper reporters who covered television; hardworking men and women who had filed their copy the previous day, before any network's schedule was truly locked.

But now, the grand exposition -- the full download of news about what people will be watching (or not) and what advertisers will be buying (or not) -- plays out via digital means. The upfront is now in every way as much a social media event as a physical experience. The only difference between the two is that the events feature in-person appearances by a cavalcade of television personalities (many of whom often look like they would rather be anywhere but there; in fact, sometimes they don't even leave their seats in the cavernous venues where the events take place). There may also be a performance by a big name entertainer or two -- plus lots of shrimp and alcohol at the parties that follow some of the events.

I’m not suggesting that the networks get all nostalgic and work harder to withhold programming and scheduling information until their events. Those days are long gone. And besides, even if the networks clamped down on the info-flow the studios and agencies would spill the beans. So, too, would actors, producers, writers and others via their own personal social media.

I actually think it’s great that NBC did what it did yesterday. It makes life much easier for reporters and analysts, who can now get a jump on the work they must do during this punishing week. Of course the result can be perpetual redundancy. It has been interesting in recent years to look around at these events and take note of guests watching clips of new shows on their cell phones and tablets minutes before they watch them on much bigger screens.

The other networks usually keep things a little closer to the vest -- especially CBS, which doesn't reveal its locked schedule until a VIP press breakfast the morning of its upfront presentation and party (Wednesday). The breakfast is a grand tradition that began in the mid-nineties when Leslie Moonves came on board. Speaking of grand, CBS always mounts such an extraordinary show at Carnegie Hall that it almost makes the social media excitement that precedes it seem irrelevant. So that's nice to look forward to … but wouldn’t it be great if it were not in the middle of a week that is crazily crowded? (And besides, blogs and social media blow up with CBS programming news between the breakfast and Carnegie Hall -- so again, everything new is suddenly not.)

Still, with every passing year the entire upfront week experience that so many of us know seems increasingly unnecessary. ABC hardly puts any real creative effort into its presentations anymore, having scaled them down in recent years. (I watch them on my computer, and there is really very little difference between being there in person and experiencing ABC online. The network's executives might as well be speaking from a conference room in Glendale.) Only Fox is trying something new, adding outdoor activities adjacent to the traditional presentation and party that are designed to engage fans (in person and via social media) in a manner that resembles a smallish event at the San Diego Comic-Con. It’s called the Fox FanFront and it is filled with Fox stars. This year it will feature a public performance by “Glee” star Darren Criss.

Making matters worse has been the influx of basic cable networks into what used to be a broadcast-only week. Said networks go to enormous lengths to make big impressions, and most of them do a great job. But they would generate much more coverage from the press if they scheduled their presentations during quieter weeks when they would have the media spotlight to themselves. The same is true of the many Spanish-language networks that have now crowded into upfront week. What’s the point? They should stage their presentations a week or two before, when they would command much more attention.

Unfortunately, I don’t see these horses returning to their barns anytime soon. But at this point no network outside of the Broadcast 5 should complain about a lack of coverage or weak attendance by advertisers or journalists when they have collectively cobbled together a schedule that makes it nearly impossible to give everyone their due.