Quality inventory is the holy grail for marketers using real-time bidding (RTB), and a new report from TapSense shows just how much they are willing to pay for it.

The mobile ad platform on Thursday released a report claiming that eCPMs in the U.S. are 213% higher on private mobile RTB exchanges compared to their public counterparts.

“Quality” can be a subjective word, but TapSense CEO and co-founder Ash Kumar said the inventory they see being put on private exchanges typically draws users that convert more often are are more engaged with apps, as the majority of mobile RTB takes place in apps.

It’s not just in the U.S. that marketers are spending significantly more (per thousand impressions) on private exchanges. TapSense says private exchange eCPMs are 513% higher than open exchanges in Australia and 325% higher in Canada. 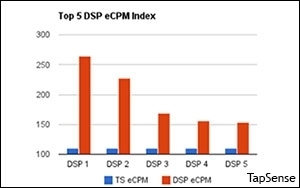