Isis Touts Growth, But Is It Gaining Loyal Users? 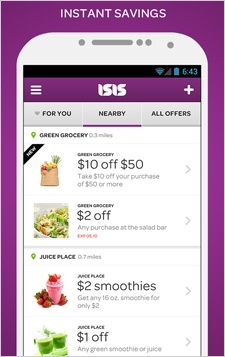 Isis, the mobile wallet venture backed by Verizon Wireless, AT&T and T-Mobile, released some user data this week following the national rollout of the service last November. It said it activated 20,000 new accounts over the prior 30 days, doubling the level of uptake from the prior month.

The numbers suggest the Isis wallet, preloaded on 14 smartphones and supported on 68 mobile devices in total, is gaining some momentum. “Getting 600,000 new users over the course of a month is pretty impressive,” said Jordan McKee, a senior analyst at mobile research firm Yankee Group. But he noted that key questions remain.

In particular, how many active users does Isis have and how much ongoing use is the mobile wallet generating? Isis didn’t provide much information in that regard, but it offer some metrics from retail partner Jamba Juice. The smoothie chain said monthly use of the Isis wallet has increased more than 50%, with more than 270,000 cashing in on their free smoothies in the first quarter.

To entice customers, Isis run promotions with Jamba Juice and other partners including Coca-Cola and American Express. Purchases made via AmEx’s Serve accounts, for example, will be eligible for a 20% discount. But what happens when those offers end “It seems to be working for now, but I’m not convinced of how sticky a wallet it is in the sense that it’s something you’re going to use a lot and get a lot of value from,” said McKee. Mobile wallets have yet to find mainstream adoption generally for all the talk about paying for everything with the tap or scan of a phone at checkout.

That’s partly because the space is still highly fragmented, with a variety of different wallet and mobile payment initiatives competing for consumer’s allegiance including Google Wallet, PayPal, and Visa’s payWave software in addition to Isis.

Apple has given indications lately it plans to power mobile payments, building on the Passbook wallet app it introduced in 2012. Amazon could also get into the wallet game, especially if it ends up introducing its own smartphone as rumored .

The biggest advantage for Isis has been the on-the-ground distribution Verizon, AT&T and T-Mobile have through their nationwide network of retail stores. McKee points out that one in three consumers still purchases their phones in a service provider’s store, giving each carrier the ability to push download of the Isis app and related marketing and education.

But it’s also hampered by other factors including a lack of iPhone support, the need for more local retail partners, and uncertainty around the future of the Near Field Communication (NFC) technology it utilizes as a standard for mobile payments.

The latest version of Android has a feature called “host card emulation” (HCE) that bypasses the need for an app to access a phone’s “secure element”—a part of the phone typically controlled by mobile operators—to process an NFC-based payment. That in turn deprives carriers of rental fees they charge card companies for storing payment information on the secure element.

But with no dominant player yet emerging in the mobile wallet space, Isis aims to build on the recent growth spurt it has seen. Isis CEO Michael Abbott in his post this week said the company plans to broaden its ecosystem of partners and “provide customers with more options as well as new ways to save.”