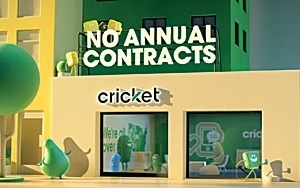 Under new owner AT&T, Cricket looks to make consumers smile with a new network, no contracts and transparent pricing.

Consumers are rarely induced to smile when interacting with their cell phone companies, but a relaunched Cricket Wireless  -- powered by a stronger network and a fresh start -- is looking to change that.

Fresh off its acquisition by AT&T and merger with that company’s Aio pre-paid service, Cricket is re-launching its brand with promises of a stronger network, transparent pricing, advanced phones and a loyalty program that rewards staying with the company.

“We’re keeping the Cricket name, but we’re changing the game,” Cricket President Jennifer Van Buskirk tells Marketing Daily. “This is a huge upgrade for all markets, including those where Cricket was already established.”

To tout the brand relaunch, Cricket aired a television commercial over the weekend featuring a new creative style, new tagline and a redesigned logo. Using animated blobs (with arms and legs) the commercial begins with the characters happily cavorting in their cityscape environment. “When was the last time your phone company made you feel like this?” says a voiceover before explaining the “new Cricket wireless,” featuring no annual contracts, coverage of 97% of Americans, and $35 a month starting price (after a credit for auto pay). The spot ends with a group of characters smiling and the tagline, “Something to smile about.”

“We’re showing how we’re new and how we’re different in the ads,” Van Buskirk says. “Customers want a friendly experience. They want a bit of surprise and delight.”

The brand relaunch also featured a redesigned logo that highlights the upward trajectory of the line in the letter “k” in the middle of the word. The entire effort is meant to appeal to “seekers of smart,” Van Buskirk says. “[It’s for] people who want a good deal; people who want to make a smart choice about their phones and service,” she says. “No contract and pre-paid is a great market, and it’s growing.”

AT&T acquired Cricket parent Leap Wireless earlier this year, combining it with its already-existing Aio Wireless brand. The new Cricket will operate as a wholly owned subsidiary of AT&T, with 3,000 branded retail stores throughout the country.

In addition to its network strength, the company will be touting its transparent pricing (advertised rates will include taxes and fees), ability to get the best devices and a loyalty program that rewards customers $50 toward the purchase of a new device for every year with the service.