OMMA Native Asks 'What Is Native'? 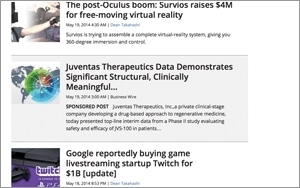 Joe Mandese, editor in chief of MediaPost, chatted up a group of media buyers on the agency side at Monday's opening OMMA Native panel to get a pulse on what native means and if anyone cares as long as it's engaging -- whatever that is.

Mandese himself articulated it pretty well when he turned out to be the only one willing to take a shot at answering his own penultimate question: if you could think of another name for native, what would it be? He offered "blurred," as in "bought, earned or blurred."

"One of the issues I've experienced is we don't know what to call it," said one of the panelists, expressing the general sentiment. "It  can mean lots to a lot of people. The question is what will the milieu of new media be? Advertorial or something else?”

Andrea Wolinetz, managing director of connected platforms at PHD Media, noted that native, such as it is, isn't content that should be considered in contradistinction to banner ads. "Facebook right-hand rail ads were native ads," she said. "It just means that an ad fits really well with a site and not well with some other site." She and other panelists agreed that the money is going native since clicks don't work on traditional ads. "And there's a push for publishers to re-imagine what ads look like."

Participants said that trust matters, so marketers shouldn’t bury their brand, especially since people don't care where the content comes from as long as it's good and pertinent to where they are right now. In other words, brands don't have to worry about consumers being turned off by their presence on their favorite news, weather, health, entertainment or cat-video sites simply because they are a brand. Better that than deception.

Said Wolinetz: "We are seeing that consumers don't care where content comes from as long as it is important to them. It is less about me reading the Times and feeling I have been snookered because the article was written by SAP instead of a journalist. We don't care. That system has collapsed." Rather, she said, it's about value. "Whether it's educational, or entertainment, we want content to be relevant. I don't care who delivers it as long as it's true. And some people don't even care about that."

conferences, native advertising
1 comment about "OMMA Native Asks 'What Is Native'?".
Check to receive email when comments are posted.
Next story loading