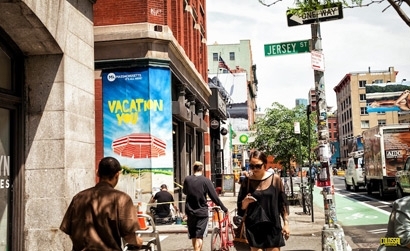 When it comes to creating ads that will lure more visitors to Massachusetts, the Bay State has decided that social media photos of happy campers are its best selling point.

Its new summer campaign, called “#VacationYou,” is aimed at creating a steady stream of visitor-generated content featuring the state’s most beautiful destinations. And it’s based on a simple truth, says Scott Madden, senior partner at Connelly Partners, the Boston-based agency that created the work: “You turn into a different kind of person when you’re on vacation. You’re more fun.”

Whether it’s the effect of going barefoot on Cape Cod for seven days in a row or just taking a day-cation to Tanglewood, “we wanted to invite people to get to know -- and then share -- their Vacation Selves in Massachusetts.”

Like many travel marketers, he says, Massachusetts has been steadily shifting its budget into online marketing for four years. “It’s how people research destinations, and how they book tickets. So we’ve been moving in the direction of becoming more of a digital content curator than an advertiser for some time.”

Last fall, it used an Instagram contest, #MAInstaFoliage, to steer visitors to real-time peak leaf-peeping experiences, and it was extremely effective.

The summer campaign’s main focus, he tells Marketing Daily, is in the New York, New Jersey and Connecticut area, using outdoor signage viewed by millions of commuters, travelers and tourists. The plan is to reach potential vacationers during planning periods in May and June, as well as use digital banners in key Massachusetts spots to build up in-state travel.

The outdoor effort includes hand-painted, large-scale murals painted on buildings, which invite passersby to take a photo, tagging it #VacationYou. And once in Massachusetts, they can upload photos in several categories, including #icecream, #seafood, #artsy, and #outdoorsy. Photos are then OK’d for location and content, and uploaded into a live stream. The Massachusetts Office of Travel & Tourism will award four vacation packages each month to contestants.

“We love that the pictures aren’t commercial, or retouched, and that people are sharing them across all their social networks. The images are much stickier as a result,” he says.

Madden says Massachusetts has continued to outperform other states in the Northeast as a tourism destinations.