Stop Playing With That Remote! Mobile Ads That Change Your Channel 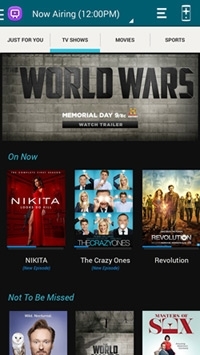 Remember when there were only two main choices for TV discovery? The TV Guide and the grid in the local newspaper? Well, three. Ratcheting the TV tuner until Mom yelled from the kitchen, “Stop that, Steven, or you will break the TV!”

Am I the only kid out there who recalls learning the art of channel changing in the pre-remote days? You had to go fast enough to satisfy your own ten-year-old impatience and slow enough not to trigger a parent’s rebuke.

“You’re going to break the tube or something!”

Thus began a lifetime of explaining media technology (in vain) to Mom. I am still trying to get her up and running on email and assure her she won't break the Internet.

Mom is really not going to like what is coming.

As my own Dish digital box becomes more sophisticated, I note ever more Web-like functionality creeping onto the screen. In recent months some on-air tune-in ads have been popping up a prompt to hit SELECT on my remote to turn to the channel or schedule my DVR to record the advertised program. This seems clever enough. But like most of these on-screen prompts, they suffer from being fleeting. Like invitations to Shazam an ad or even text a number, these sorts of prompts seem to imagine an attentive audience ready to respond in a Pavlovian manner to callouts. I can’t grab the remote or even load the appropriate app fast enough for this scenario.

But the ability to click into a TV program from a tune-in ad is compelling, if also a bit disconcerting for the programming it appears on. Folding that capability into a mobile ad unit has even bigger possibilities.

The Peel Smart Remote app this past weekend launched an ad campaign for The History Channel’s Memorial Day debut of its “The World Wars” mini-series that does just that. With the right hardware combination, the media discovery app allows the ad viewer to perform one of three essential media triaging functions. He can switch directly to the channel with a tap on the mobile device, set the DVR to record the program or set a calendar reminder on the phone. The company calls the unit a “Peel-In.” It can target users in the app when they are watching related programming or when they search for content in the genre. The idea is that the ad is reaching someone not only when they are trying to discover content but when they are in the mode for consuming. A click-to-click activation essentially allows the media advertiser to close the loop and effectively make the sale.

Peel is able to control a TV or set-top-box because it works with Android phones that have IR Blaster hardware capability. The app is built into Samsung Galaxy S4 models as the “WatchOn” all and the S5 as the “Smart Remote” app. Peel tells me that of the 75 million Peel users a majority have that capability.

The company says that this model allows for some unprecedented metrics delivered to a media owner about their tune-in ad. Because the app is working in tandem with geolocation, user profiles and in-home hardware it can tell the advertiser not only the number of people who tuned in as a result of the ad but their profiles, location, MSO and even brand of TV set.

Given that the app is parsing down to interested users who have the app open, with the required hardware capabilities, I am curious exactly how much reach it can achieve. The options to record later and set reminders help considerably in reaching a wider audience. In the end, I think these other two functions might be more valuable to most users than a prompt to turn the channel that second.

But this Peel-In model certainly glimpses a future where advertising plugs into a more synchronized cross-screen functionality that allows TV and mobile devices to hand off work to one another and close the loop on the inspiration a viewer sees on one screen. Consider how tune-in advertising, so much a part of the entertainment media-buying segment, can start to follow a performance model. If a click-to-click or click-to-record model becomes commonplace on handhelds, then tune-in ads become like app install ads -- measurable eyeball drivers to TV properties. Just as lucrative would be the on-demand market, where ads could command your DVR to download a range of older and recent programming you might have missed. Media companies could use these mobile promotions to drive post-event viewing to drive up their C3 numbers or even compensate for disappointing live numbers.

The value of this kind of synergy among screens is why the living room will remain a marketing battlefield for a while. Clearly Apple and Samsung understand the power of owning the mobile-to-TV hardware connection. But the MSOs are already actively upping their app game. My Dish app is where I program my DVR while having dinner out. This is still the most likely place for me to discover content and respond to promotions most easily. But if the tech connection between phone and TV/set top is ubiquitous and standardized, then any third-party recommendation engine like Peel has a shot at providing a better discovery-to-activation experience.

apps, mobile, tv
2 comments about "Stop Playing With That Remote! Mobile Ads That Change Your Channel".
Check to receive email when comments are posted.
Read more comments >
Next story loading