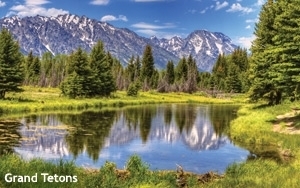 I'm planning to drive this summer through Yellowstone and the Grand Teton national parks. I haven't been in the area since crossing from Brooklyn, N.Y. to California at the age of seven. My family drove through the parks with the black ragtop down on the cherry red Pontiac convertible. A lot has changed since then. Analyzing data from Adgooroo, it appears that most families this summer will head to Florida's or California's amusement parks.

Disney recently increased prices to gain entrance into their parks, but apparently that hasn't stopped travelers from choosing the theme parks as a holiday destination. The parks accounted for four of the top five-searched terms. Universal Studios ranked No. 2 on the list. Las Vegas came in at No. 6 on the list, followed by Florida, Puerto Rico, Hawaii, and the Dominican Republic.

Expedia (the word) was clicked more times by consumers than any other travel keyword. Cheap Flights followed, along with Travelocity, Southwest, JetBlue and Priceline. Orbitz, U.S. Airways, Amtrack, Southwest Airlines rounded out the top 10.

The top 20 most-clicked travel keywords include the terms "vrbo," or vacation rental by owner, and "airbnb," short for Airbnb.com, a site that enables travelers to connect with home owners wishing to rent out their properties for vacations.

In 2013, the top companies with the highest budgets for travel differ when compared with the most searched-on keywords. The 2013 ranking of the Top 10 travel advertisers based on U.S. AdWords desktop and tablet impressions contains the same companies as the 2012 list, but the order changed, per Adgooroo

The hotel booking portal Booking.com landed at No. 1 in 2013, up from No. 7 in 2012, while travel-comparison site Kayak.com dropped from No. 1 to No. 5. Both sites are owned by Priceline, but Priceline.com came in at No. 3 in the ranking, down from No. 2 in 2012. Priceline accounted for more than 35% of all paid search travel impressions garnered by the ten sites in the ranking, per Adgooroo.