The Breakdown Of Mobile Programmatic Buying

Over half (57%) of advertisers are buying mobile ads via programmatic, with the majority of those mobile buys (35%) coming from agencies. Demand-side platforms (DSPs) account for 26% of all mobile programmatic ad buys. Trading desks account for 19%.

That’s according to an infographic released by Millennial Media earlier this week. The company surveyed an unspecified number of marketers and used data gathered from its own mobile ad exchange to create the infographic. The survey took place in April 2014.

Much has been made of brands taking programmatic into their own hands, and the Millennial Media infographic found that 11% of all mobile programmatic ad buys have come 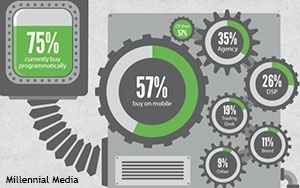 straight from brands so far this year. That is in line with Casale Media’s Q1 2014 research that also found that 11% of all U.S. spend on programmatic came directly from brands.

No matter who is doing the buying, spend is clearly on the rise.