Although big media agency GroupM may be moving to C7 rating from C3, other media agencies, as well as some movie studios, might not follow -- at least for this upfront season.

C3 has been the industry's virtual “currency” since 2007 for all national TV networks.

Fox and CBS would only confirm they have made a preliminary deal with a major media agency to move to C7 from C3. NBC and ABC had no comment. Group M executives did not respond by press time.

Media executives were careful to note the shift to C7 does not mean actual upfront deals were contracted by GroupM -- only that these preliminary deal points were agreed to. GroupM represents anywhere from 25% to 30% of all TV media buying, according to some estimates.

Back in 2007, GroupM led the way in pushing for a similar change to C3 rating guarantees from live program guarantees. Virtually all other agencies and clients agreed to link their upfront deals for the 2007-2008 season to C3.

But unlike seven years ago, this GroupM move to C7 may not expand to a wholesale industry change to a new rating guarantee metric. Media agency executives, such as from big media agency, Starcom MediaVest Group, have said it would be unlikely upfront deals would change to the C7 metric this year. In response to the news from GroupM today, John Muszynski, chief investment officer of Starcom MediaVest Group's Spark, tweeted: "C7? Did someone really agree to pay for C7 in a buyers market? Really? Need a list of their clients!" (see screen shot below).

Many media executives believe that in making deals using C7, GroupM is looking to extract better pricing heading into this upfront period -- which, according to estimates, is poised to be a weaker market with cost-per-thousand viewer pricing (CPMs) anywhere from 4% to 7% above a year ago.

While TV executives such as Les Moonves, president/chief executive officer of CBS Corp., have been predicting a move to C7 for some time, other executives believe this is only an intermediate step when it comes to guaranteeing viewership -- that ultimately it needs to include all viewing on all TV-video screens.

Clients such as movie studios and retailers continue to be leery about paying seven days of TV ratings guaranteed over such a long time period -- especially when many have short-term, near-term weekend promotion creative. But media executives says lower price points could alter their opinions.

Starting around two years ago, a handful of individual advertiser C7 metric TV deals have been made across a number of TV broadcast networks.

Steve McClellan contributed to this story. 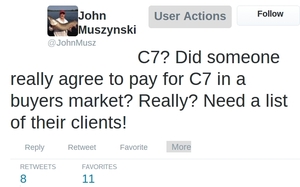