What's 'Programmatic'? (No, Really? Because 25% Of European Marketers Haven't Heard Of It)

Programmatic ad technologies have been put to use around the globe, and some recent reports pin Europe as one of the fastest growing regions of adoption.

But that’s not to say there isn’t plenty of room left for growth overseas.

One in four (25%) European marketers have never even heard of “programmatic,” according to a new report from AppNexus, Warc and IAB Europe.

The three companies surveyed over 600 agencies, publishers and marketing departments across UK, Spain, Germany, France and Italy to get some insight into how programmatic is being used in Europe. The survey was conducted in April/May 2014. 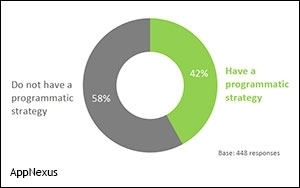 “Whilst it’s possible to argue that marketers don’t need to understand or implement programatic strategies when their agencies are there to do it for them, the fact that one in four marketers (25%) in the survey had never previously heard of programmatic means they cannot properly plan the role of advertising within their broader strategy,” the report reads.

It continues: “In short, too few marketers understand the potential scale and speed of today’s advertising and will not properly allocate budget for the media agency to really change the game.”

In a similar vein, fewer than half (42%) of marketing organizations in Europe have a programmatic strategy in place. Of those that don’t yet have a strategy, 29% cite “skill shortage” as their biggest barrier. Another 26% say they don’t have any budget available for programmatic, while 13% say a lack of ‘transparency’ is holding them back.