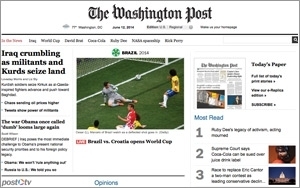 Just over one in 10 Internet users (11%) have paid for access to news online in the last year, according to the 2014 Digital News Report from the Reuters Institute for the Study of Journalism at Oxford University.

The Reuters Institute noted that this figure was unchanged from the year before, suggesting that news producers are failing to make much headway as they struggle to convince consumers that they must pay for their information.

Among non-payers the proportion of respondents who said they might consider paying for online news at some point in the future was also quite low, at 11% in the U.S., 7% in the U.K., 15% in Germany, and 10% in France.

Here the study observed: “New pay walls and paid apps often find easy growth for a while and then stall -- after the supply of loyal users runs out.” If there was a glimmer of good news, it was that 59% of respondents who paid for news said they were doing so with regular subscriptions, up from 43% in 2013, which will provide a more dependable revenue stream for news orgs who succeed in selling subs.

While not exactly encouraging about the overall prospects for paid online news, the 2014 Digital News Report contained a number of other interesting findings relating to new consumption patterns. Thus, 39% of news consumers worldwide said the use two or more digital devices to get news each week, and 12% use three or more devices. Further, 37% use their smartphone for news on a weekly basis, and 20% saying their smartphone is their primary device for getting news.

The rise of mobile news consumption doesn’t mean that people are consuming news from more sites; in fact, it’s just the opposite. Smartphone use appears to encourage users to get news from fewer sources. Some 37% of smartphone users surveyed around the world said they get news from just one source on their smartphone each week, rising as high as 55% in the U.K. This probably reflects growing dependence on a small number of news apps, according to the Reuters report.

Reuters also found that Facebook is “by far the most important [social] network for news everywhere,” beating out Twitter, which has so far failed to establish much of a presence outside the U.S. and U.K. Worldwide 35% of respondents said they use Facebook to share news, compared to 15% for Twitter, 7% for Google+ and 6% for WhatsApp.

The information was based on a survey of 19,000 people around the world conducted for the Reuters Institute by YouGov