No Cannes Do: How Not To Advertise Your Creativity

Pittsburgh, Definitely Not France -- No blue Mediterranean here, but the Monongahela River is splendid in its own way. Plus: no sneering.

While the advertising industry is decamped to Cannes drinking watered-down and marked-up rosé, I am here in the erstwhile Steel City on a project that (with the help of divine providence and/or visionary underwriter) will revolutionize publishing.

But thanks to the miracle of social media, it’s as though I were simultaneously on the Croisette, basking in the sun and reflected self regard of the alleged creativity industry. I say “alleged” because to me creativity flows from the confluence of inventiveness and resourcefulness, much as the Allegheny and the Monongahela form the mighty Ohio. The problem, as I’ve always seen it, is that the resourcefulness element is too often dammed off. That imbalance hasn’t reduced festival entries, but has continually subordinated client needs to gratuitous novelty.

It’s a song I’ve been singing for decades: the cult of originality trumping the advertiser’s need to sell things to actual consumers who are not awards jurors, expensively dressed to appear scruffy and weary of derivation. And that is sadly true. So true that I’ve gone so far as to assert that -- if it helps the client’s business -- there’s nothing all that heinous about stealing an idea or two, so long as there is no overlap of category or geography. Many, of course, have. Brazenly. In fact, I daresay some 2014 Lion winner from Brazil will find its idea expropriated by someone in Sweden, or vice versa.

On the other hand, thanks to that above-mentioned miracle of social media, I have sadly witnessed the other hand: a case of outright plagiarism passed along its Twitter feed by Ogilvy & Mather. Courtesy of Jim Romenesko’s blog, get a load of this: 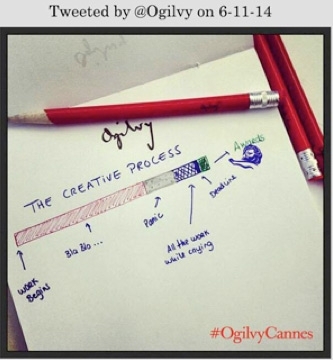 Kind of funny, because it’s kind of true, right? The thing is, the graphic inaccurately reflects the creative process behind itself -- which was simply to rip off an artist/writer named Drew Fairweather, who almost two years ago penned this: 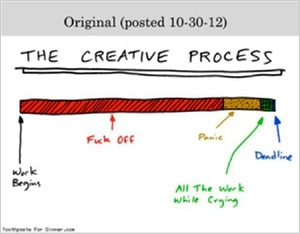 Whoa. I print in its entirety the email of explanation forwarded me by an Ogilvy executive, whom I will not name so he or she can enjoy Cannes in relative peace.

The image in question that was tweeted last week was pulled from an Ogilvy & Mather employee's Instagram feed and re-posted not as a proprietary Ogilvy & Mather creative process, but simply a fun piece of content prior to Cannes. When we became aware of the image's original source we reached out to the artist with our sincerest apologies and subsequently deleted the tweet. As I'm sure you can understand, in the age of the proliferation of social media, it's often difficult to provide proper content attribution due to how quickly content is shared and, unfortunately in some cases, distanced from the original owner.

“Not as a proprietary Ogilvy & Mather creative process.” I suppose the Ogilvy letterhead and pencils are just a big coincidence. And who knows -- maybe they are. Yes, what looks like corporate doubletalk may actually be just a tortured explanation of a benign misunderstanding. But as I sit here in Pittsburgh, working on a book series about extraordinarily creative thinkers, itself published in an entirely novel way, one thing I suddenly understand is why my general indifference to advertising derivation (or worse) has been misplaced.

It’s true that the client’s needs are paramount. And it’s true that advertising is not art, journalism, scholarship or any discipline that demands attribution of an idea’s provenance to maintain internal integrity. However, this episode reminds me that advertising agencies advertise themselves as fonts of originality, innovation and inventiveness. To get caught red-hashtagged pilfering the ingenuity of others is not only embarrassing, it’s an impeachment of the industry’s selling proposition  -- which, in Ogilvy’s case, is (ahem) “Where creativity means business.”

Truly, this is not meant to shame anybody, unless possibly me. It’s meant as a confession: that it required an episode of, let’s say, social-media carelessness to finally teach me the obvious lesson about creativity. It is not the Ohio River.

It is the Chesapeake Bay, fed by many tributaries -- two of which are inventiveness and resourcefulness, but others of which are trustworthiness, due diligence and self-respect. So if you are Swedish, Brazilian or otherwise, and you see something irresistible this week in Cannes, have a look at Fairweather’s chart. Look particularly at the red part.

Then do as instructed.

content issues, creative, social media
5 comments about "No Cannes Do: How Not To Advertise Your Creativity".
Check to receive email when comments are posted.
Read more comments >
Next story loading