What Will Be The CueCat Of The Wearable Era? 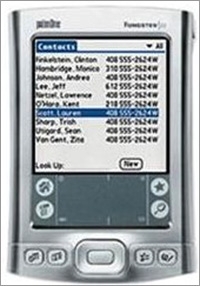 Which of today’s growing field of Web-connected devices will be tomorrow's equivalent of the Apple Newton or PalmPilot? A recent Consumer Reports article spotlighting electronic devices that have faded away in recent years, rendered obsolete by a new generation of technology, brings to mind how short-lived the life of gadgets can be.

One thing that stands out in particular is how the proliferation of smartphones and tablets together has wiped out whole categories of other devices, like PDAs (personal digital assistants) and MP3 players, and increasingly, dedicated e-book readers. The iPod, of course -- which crushed other MP3 players -- is still around, but is transformed from the earlier, monochrome models.

The BlackBerry, by offering push e-mail and phone service, marginalized the PDA market and sent the mighty PalmPilot into early retirement. The mass adoption of the iPhone and Android handsets, in turn, have broken BlackBerry’s grip on the enterprise market and left the company struggling to survive as a provider of mobile software and services.

The consolidation of functions into the digital Swiss Army knives of smartphones and tablets in the last decade clearly has not been a benefit to the fortunes of more specialized devices, doing away with their raison d’etre. The Apple-Android duopoly reigns supreme. But the mobile landscape is shifting again, with the emerging Internet of Things leading to a host of new Web-connected and wearable devices.

Many are not necessarily new, but digitally repurposed to collect and spit out data from everyday objects, from wristwatches to eyeglasses to home thermostats. The myriad opportunities are surely intriguing to marketers, but they also mean an even more fragmented mobile picture, with some product lines that will never end up getting traction. Cue the Web-connected toothbrush.

The Nike FuelBand has been an early casualty of the nascent wearables war, underscoring the difficulty for a brand to directly participate in the market because of the investment and resources needed to constantly upgrade hardware and software to  compete with tech-focused rivals. Most brands are better off leaving the tech heavy lifting to others and focusing on apps and other tactics that run on top of new platforms.

Even so, there is no guarantee that wearables from the Silicon Valley's biggest names will have staying power. If not an outright dud, Apple's expected iWatch may not prove the next blockbuster product Wall Street has been looking for since the iPad's release in 2010. And Google Glass many never be more than a high-priced tech toy confined to certain parts of Silicon Valley.

The only certainty is that there will be a new group of gadgets that either never gained a footing or were supplanted by subsequent technologies. But because brands are much more involved in mobile marketing than they were five or 10 years ago, they are also more likely to be collateral damage in the world of Web-connected devices.