Driven To Distraction: The Second-Screen Dilemma 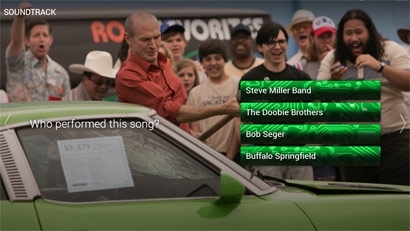 One of the big mysteries yet to be unlocked about mobility is how exactly most people really want to use their devices in concert with TV screens. Most of the evidence suggests that people maintain a kind of separate sphere on their devices from the content that is happening on the TV screen. Most of the time we are perusing unrelated content, checking email, chatting on message apps or using social media in some way. There are moments and instances where the TV and device content intersect, of course. Certain calls to action on the big screen will prompt reactions on the little one. A number of cases and research results have shown that synchronized ad impressions across screens and even follow-up ads on devices can have impact. But ultimately we are still talking about capturing small slices of people who viewed a given TV show or registered an on-air ad and then received some sort of follow-up on their phones.

The original model of “second screening” first floated years ago turned out to be more of a wet dream of programmers and advertisers. In that fantasy viewers were glued to their synchronized apps, somehow monitoring the relevant social media stream and interacting with trivia, polls, etc. Check-in apps like Viggle and GetGlue and audio recognition tools like Shazam have had some success capturing a niche of viewers who want to toy around with this stuff. And third-party second-screen apps like Beamly, formerly Zeebox, are still around. That app relaunched recently and claims to have tripled its user base as a result and sees 3 million users each month worldwide. They say their average visits per user each week is 5.4 with average sessions lengths of 28 minutes.

Which is fine for that small group of people who really want the two-screen synchronized experience. But I think most early tests of the model across defunct apps like Yahoo’s IntoNow and many others I can’t even remember now suggested that people don’t like to tend their apps while watching TV. The relentless scroll of social comments was overwhelming, and it turns out that people really don’t want someone else distracting them form the TV set. They prefer to distract themselves on their own terms.

So it was with interest that I tried two different synchronized second-screen experiences Sunday night on two very different shows. The Rising Star show purports to incorporate its mobile audience in two ways -- voting on the contestants and having select portraits of the app users projected onto a wall on air. The app’s approach is that less (much less) is more. Basically, the app lets you know which contestant is next, allows you to vote during the performance (which registers on-app and on-air in a cumulative vote. Then the app will occasionally tell you to keep the app positioned facing you because presumably it is recoding your picture for use on the wall. And that is about it. Which is sad, because this program is so achingly bad, it needs a second screen to distract one from the pain. The performances themselves are lackluster. The human interest prologues where a bland host asks bland predictable questions of the contestant are risible. And the cumulative badness of it all left me staring at my phone begging the second screen to give me something to fill this vacuum. Sometimes less is less.

Later that evening I used AMC’s “synch” platform for the “Halt and Catch Fire” series about the early PC industry. Their approach was more finely timed and interesting, if not compelling. the Web app (no downloading required) offered a bit of related trivia or a show trivia quiz question for each major scene. It was unobtrusive but only occasionally entertaining in its content. The best content called attention to a little period detail in the action, like the anti-static strap that one of the leads wore when handling the hardware -- a relic that is nicely annotated in the app but unexplained in the show. Quizzes about the characters and plot lines, however, feel like pointless busywork. And overall I still felt as if the limited second-screen experience was tugging my attention from the main story.

The challenge for second-screen synchronized programming is that they still feel like distractions rather than amplifications. Reality programming continues to give us such big swaths of stupid on-air content that the second screen can help fill the voids and the tedium. Drama remains a tough one to manage. Part of the problem is that we all enjoy the distraction of our own second screens when we are driving the temp, timing and nature of the distraction. When a third party is driving it, we may tend to recoil. I wonder how -- if at all -- programmers and advertisers ever master this. After all, TV watching is a highly idiosyncratic behavior. It is filled with distractions and varying degrees of engagement. Trying to slip into that flow with anything like a generalized patter of directed distraction may be a fool’s errand in the end.

There are exceptions, and I think it usually has to do with TV content with which we have different relationships. Content with which a viewer is very familiar, like the umpteenth rerun of that "Modern Family," Adult Swim or "Big Bang" episode, I  suspect, leave more air space for direct distraction. We don’t need to be as engaged with the first screen because the content is already running in our memory anyway. These are also the most passionate viewers who likely want annotations and deeper content thrown at them. But again, that exception underscores just how our relationship to content is so variable and idiosyncratic and resistant to generalized solutions. Media experiences are highly personal. Getting between the viewer and his or her content takes a finesse we probably haven’t seen yet.