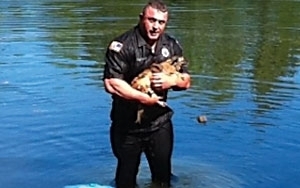 Last month, a picture of Massachusetts Police Officer David Harriman saving a woman’s dog from her submerged car racked up nearly 400,000 likes, 34,000 comments, 59,000 shares, and an overall engagement rate of 21.3%, according to fresh findings from Prague-based social analytics firm Socialbakers.

"Social has always been an important part of our strategy,” Alex Zhardanovsky, co-founder of PetFlow.com, said on Wednesday.

“We engage frequently with our audience of over 2.7 million fans on Facebook, and drive a tremendous amount of traffic to our site … because of it.” A quick scroll down PetFlow’s Facebook page illustrates the company’s social marketing strategy: bait consumers with anything cute, cuddly, heartening, or humorous.

Following the lead of Buzzfeed and other publishers, brands like PetFlow are learning that people can’t resist sharing this sort of content, which makes for easy and effective marketing.

And the approach appears to be paying off. Just four years old, PetFlow saw sales of $39 million last year, and expects to break the $50 million barrier this year.

Seeing success with a similar marketing approach, Nestlé Purina PetCare’s Waggin’ Train Dog Treats brand achieved the greatest engagement rate gain on Facebook, in June, according to Socialbakers. Rebounding from a ton of negative press related to the safety of the jerky snacks, the brand saw its engagement rate increase 1,139% to a whopping 60.49%.

Yet while social media offers marketing opportunities for upstarts like PetFlow, the medium is securely dominated by the world’s largest brands.

In June, Wal-Mart, Amazon, and Target -- each of which could be considered a PetFlow competitor -- boasted about 32 million, 22.6 million, and 21.6 million Facebook fans, respectively.