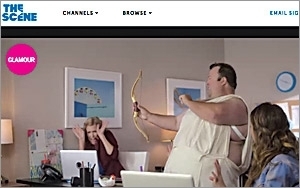 Media buyers (or those not cool enough to get private demos) are getting their first look at The Scene -- Condé Nast Entertainment’s ambitious new video hub.

Announced back in April at the publisher’s Newfront fete, The Scene officially launched on Wednesday and represents an aggressive move into video aggregation.

“Not every video … Just the ones worth talking about,” The Scene's tagline promises.

Along with CNE’s own content -- produced by growing digital departments within Glamour, GQ, Vogue, Wired, Bon Appétit, Brides, and the like -- The Scene is serving as a video distribution platform for ABC News, Buzzfeed, Major League Soccer, Variety, and Weather Channel Films, among others.

As publishers reposition themselves for the digital age, video offers to surest path to big ad dollars. The only problem is competition for consumers’ attention — especially that of coveted millennials.

Rather than squeezing into a crowded marketplace, however, CNE sees itself as filling a void left wide open by video leaders like YouTube and Hulu.

Reminded that YouTube has pumped millions of dollars into quality digital-first fare, Valentino still insisted that The Scene has no comparable competition. “There’s no company out there leveraging our brand equity,” she said.

Buying into The Scene’s promise of exclusivity and scaled audience reach, Gillette’s Clear Gel deodorant and Allstate have signed on as launch partners.

Along with a significant site presence and standard pre-roll ad units, Gillette and Allstate will each be the focus of original branded content produced by CNE. (Valentino declined to discuss financial terms of either deal.)

Going forward, Valentino said about 100 advertisers will get the opportunity to buy into The Scene through audience targeting and integrated sponsorship deals. “You’ll see a lot more of that unfold soon,” she said.

Food-focused shows include Bon Appétit’s “I Effed It Up,” staring senior food editor Dawn Perry, and “1 Item 3 Ways” for Epicurious, which focuses on seasonal food items, and three ways to reinvent them. Glamour, meanwhile, has “30 Things,” a new series produced by Kelly Ripa and Mark Consuelos, which presents the must-haves and “must-knows” for women around the age of 30, and “Glamour Documentaries.”

This year, eMarketer expects $5.8 billion to be spent on video advertising, which is still a far cry from the $68.5 billion likely going to TV.