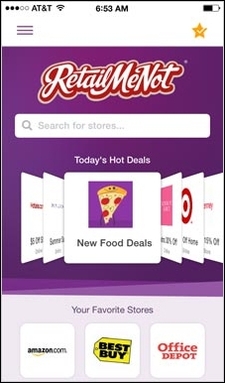 For most of its early life, the app ecosystem stuck to its silos. Looking for a movie? There are discrete apps for that. Want dinner? There are other apps for that. Going shopping? Well, there are only about a few thousand for that. But in each case most of those apps focused on their core category.

I think this next stage of app development is going to see more interesting content combinations and partnerships that come out of the fact that mobile moments make for interesting bedfellows, things that we tend to do together in one place.

To wit, the popular coupon site and app RetailMeNot recently added local restaurant deals and offers to its existing service that finds relevant coupons at nearby retailers and malls. RMN caught my eye over a year ago, as it was among the first shopping app to use geo-fencing to trigger user alerts. It has since grown substantially.

The app has been downloaded over 18.5 million times and in just the last year enjoyed over 450 million sessions. The geo-fencing feature has expanded to cover over 15,000 locations, including airports, event centers and universities. While many developers once feared that geo-fencing would pester or creep-out user, RMN says that 65% of its app users opt in to these alerts.

Adding the food deals was an idea really driven by user behavior, says Brett Billick, VP, membership. “We see our users across devices searching for food deals. It has been amazing to watch -- even on the Web site on Friday nights, some of the top offers that are trending are pizza deals.”

The company also saw a need to develop a better way of identifying local deals. While RMN has direct relationships with over 10,000 retailers to publish offers in their apps and sites, it also gets much of its material by searching and aggregating available online offers from local merchants. Billick says that in the restaurant industry, where local franchises put out their own local offers specific to certain outlets, the Web-sharing ecosystem often leads to confusion.

People tend to share offers that don’t apply to the recipient’s local market. This leads to a lot of awkward moments for consumers at QSRs when the restaurant can’t honor the offer. RMN is using its location-aware technology to push people the deals that are applicable only in their immediate vicinity.

But this consumer demand for both shopping and restaurant information also underscores how much mobile is about in home pre-planning. As we come to understand how people are using devices we move away from the old on-the-go model. In fact a great deal of mobile work involves pre-planning for places the user hasn’t gotten to yet. “People prepare,” he says. “And they may prepare on their device and triage on mobile.”

As studies have suggested, this planning is an iterative process that can take place across screens and days. RMN has discovered that the simple function of saving deals across platforms has been enormously effective. This is also where the company’s recent iPad app comes in. It is designed expressly for those nighttime lean back planning sessions that are then activate on site on another device.

Billick says the next stage for RetailMeNot apps is to refine the location functionality. The company has already tuned the geo-fence so that it no longer pings me just when I am passing my nearby mall on the highway. Now the fence is smart enough to distinguish passing by from being in the parking lot coming to shop. Similarly, the app is working with shopping malls with in-venue location devices like beacons to get even more granular.