Watch This: The 'Kids' Weigh In On M-Ad Formats 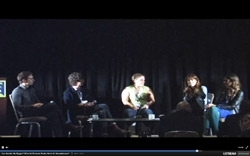 Okay -- so they aren’t really kids. From the north end of fifty-something, they all look like kids to me. But the panel this week at OMMA Premium Display in LA on “Can Smaller Be Bigger? What Ad Formats Really Work On Smartphones?” was among the few I ever put on stage without a grey hair visible. No -- not a teen focus group, but clearly both makers of mobile media and advertising as well as the core mobile consumption group.

In fact, we had moderating Mike Poznansky, founder of collegiate marketing firm Neato and former campus marketer for Red Bull, who not only kept everyone on point but also pressed for good examples. And one of the things I liked about the session was how little they talked about banners and interstitials so much as calls to action and interaction.

Among the good examples, Pamela Naumes of Bolthouse Farms discussed how they leveraged Instagram in its first ad tests. Whenever people snapped a picture of their juice bottles and hashtagged it they received a $1.50 coupon in return on the spot. For her business goals of expanding the customer base and her budget this was a much better investment than buying banners. They also cited Kiip and putting rewards-based promotions into apps that people already use.

Maude Standish, founder and managing director, Tarot Insights, discussed the challenge of integration to avoid interruptive formats. Targeting rewards to the values and joys of your target group, for instance, is fundamental to social sharing. Sarah Jennings, creative director at Millennial Media, was refreshing in sharing some of the revealing failures she had been assigned to design over the years. Interaction is a good principle to designing campaigns, but don’t ask people to do meaningless tasks that really just serve the brand rather than the user. Having users pose with the brand and then expecting them to share the picture is not a compelling or realistic KPI. Understand what you are asking your audience to do. As Naumes says, the real secret to mobile is merging online and offline worlds

David Coleman, global product lead, display ad formats, Google, recommended that everyone review the famous Coca-Cola “Buy the World a Coke” campaign. It used multiple screens and “took advantage of all the features of the phone” from GPS to cameras to connectivity. It let you buy people around the world a Coke on the spot via remote vending machines. Google Translate even translated the thank yous.

Maude reminded everyone that the people she researches are sick of seeing the same ads everywhere and have come to hate the product. Too much has been invested in the how of targeting without the why. In fact, this was a theme across all of our three days in LA -- creative. Many people seemed to acknowledge that the science of digital display is eons ahead of the art. “We need to get investment into the actual stuff people see,” she said. Pam amplified that she never uses the “C Word” (“Campaign”) which really focuses on budget and media rather than concept.

I also like that David of Google and Sarah of Millennial compared and contrasted build-once-distribute-everywhere approaches and their scalability with leveraging the uniqueness of mobile.

Well, enough of the recap. The “kids” can do this better than I because they brought great energy to this discussion. Watch for yourselves. Just ignore the graying old fart introducing them. I don't know why they let Dad into the basement anyway.

Many thanks to Mike, David, Sarah, Pam and Maude.