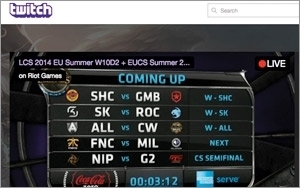 Google has reportedly closed a deal to acquire Twitch for $1 billion to join YouTube as it builds out its video and live streaming business. The deal highlights the use of the Web for live streaming events, especially for sports and concerts.

The deal moves Google one step closer to building a broadcast network of sites and cloud-based services supported by broadband speeds that only Google Fiber offers.

Twitch, created by Justin.tv founders, supports live video games and video game streaming. Variety first cited the deal in May, saying Google planned to make an all-cash offer. Now the media site cites sources that say Google and Twitch sealed the deal. Twitch allows site users to upload and watch for live game-play videos free on the Web or on Microsoft Xbox One and Sony PlayStation 4.

Twitch recently announced an update for its app version running Android that allows viewers to watch games anywhere. The app supports an expanded search feature that helps viewers find broadcasters live or offline. Once they have selected a channel, users can learn more about the broadcaster, follow them, or chat with other gamers, even when they're not streaming content.

Twitch supports more than 50 million monthly active users and more than 1.1 million members broadcasting videos monthly. The audience is primarily 18 to 34. The site also distributes shows from CBS Interactive’s GameSpot, Joystiq, and Destructoid -- all gaming-news sites. More than 13 billion minutes of video are watched per month on Twitch.