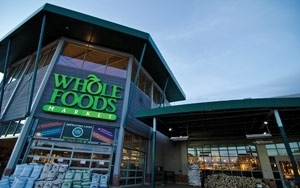 As the rest of the grocery retail world adds organic, sustainable and generally yummy choices to its shelves, Whole Foods Markets is struggling to hang on to its edge. The retailer released third-quarter results that came in below industry analysts’ expectations. Net income climbed to $151 million, from $142 million. And despite posting record sales for the quarter of $3.4 billion, a 10% gain, it lowered its forecast for the full year.

It is that steadily slowing growth—with comparable-store sales rising just 3.9% this quarter—that has observers worried about the Austin, Tex.-based retailer’s prospects.

The company’s commentary was upbeat: “We are seeing signs of stability in our sales trends and believe our strategic initiatives will help generate further momentum and produce increasing returns on invested capital over the long term,” says Walter Robb, co-chief executive officer of Whole Foods Market.

And while its previous guidance called for a sales gain of between 10.5% and 11%, it lowered the outlook to between 9.6% and 9.9%, noting that the fourth quarter is seasonally its weakest.

Euromonitor says the company’s share of the North American grocery market has grown steadily, from 0.5% in 2004 to 1.4% in 2013, making it the 11th largest. But as lower-priced competitors have scrambled to expand their organic offerings, focused more on sustainability and introduced well-priced private label lines at lower prices, Whole Foods — which has never quite managed to shed its “Whole Paycheck” nickname — seems to be losing its edge.

In its recent rankings of America’s favorite grocery chains, Market Force, a Denver-based market research company, says Whole Foods failed to make it into the top 10 this year, as brands like Safeway, Publix, Trader Joe’s and Costco, made inroads. Last year, it was ranked in the top 5.