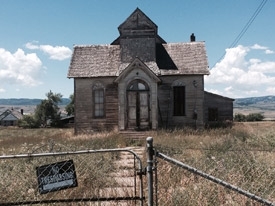 Some amazing structures remain on the Oregon Trail, a 2,200-mile historic east-west rugged wagon route originally only passable on foot or by horseback, but trying to get Internet access from some of the stops to share photos on Google+, Facebook or Twitter seems pretty much impossible. The same goes for Yellowstone National Park, where the deer, bear, buffalo, bison, moose and other animals run free. It makes you feel as if you're in a wildlife zoo without the modern conveniences that most of us have come to depend on.

Project Loon, an experimental effort to use high-altitude load-bearing balloons to provide Internet access to remote areas with speeds at least as fast as today's 3G networks, no longer seems like a crazy idea. Some may say that's the point of taking back roads across America. Go off the grid and get back to nature. The biggest problem I found is with cultural characteristics -- sharing experience with those who are not with you.

I stayed at the Yellowstone Lake hotel, which didn't have WiFi or AT&T cellular service.

Bringing Internet access to those without, even in the United States, requires a variety of technology, not just cell towers to transmit mobile signals. Similar to Google, Facebook wants to connect those in remote areas. I initially doubted Facebook Yael Maguire's claim that only one one-third of the world can connect to the Internet until I spent time traveling the back roads of the United States.

Facebook, along with Ericsson, MediaTek, Opera, Samsung, Nokia, and Qualcomm are part of a global partnership called internet.org that's trying to connect the world through access to the Internet. They share tools, resources and best practices in an effort to connect the world.

A few days ago, internet.org launched a mobile app giving people in countries outside the U.S., such as Zambia, access to free basic services that let them browse a set of useful health, employment and local information services without data charges. The idea sounds great -- but a major challenge remains in giving people access to data services that allow people to connect.

So the next time you have the opportunity to fly across this great land of ours, take the time to drive instead. When you drive across the country you see things otherwise hidden from view such as a billboard advertising Google Fiber, and Adobe's new headquarters in Lehi, Utah, off the freeway in front of Cabela's. In fact, the glass building makes a bridge across the driveway leading up to the store known best for its hunting and fishing apparel and gear.