According to TubeMogul, a programmatic video ad platform, serving ads on sites with higher viewability rates can nearly double purchase intent -- and boost message recall and product awareness as well. TubeMogul’s research comes from over one million streamed video ads.

TubeMogul divided the sites the ads were viewed on into two categories: one half with better viewability rates and one half with worse. 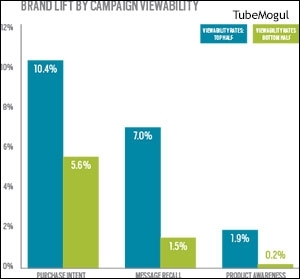 “Video’s inherent purpose is to drive upper-funnel activity, which is why viewability is so crucial to the medium,” TubeMogul wrote in a post to go along with the research. “If a marketer’s goal is focused around increasing lift in one of these three areas, viewability should definitely be one of the primary KPIs.”