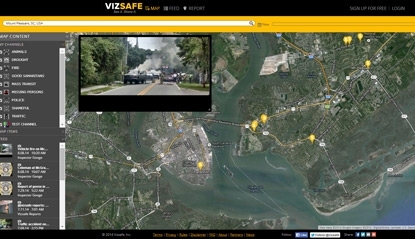 Facts sometimes get in the way of people spewing rhetoric, but a complete, unedited video describing a robbery or an officer-involved shooting like the one in Ferguson, Mo. would tell all if uploaded to a secure social media platform to share with law enforcement and communities around the world in real-time.

A tip line goes directly to the police department and does not capture metadata like geolocation. It also lets people post images and comments anonymously. Technology security expert and entrepreneur Peter Mottur has created an app and platform called Vizsafe, a community alert app that allows residents to post geolocation-based photos and videos of crimes being committed allowing police to monitor posts and respond as quickly as possible. The company has worked with the New York and New Jersey Port Authority on the Super Bowl, along with the Boston police department during the Boston Marathon.

The platform, which allows users to filter the information based on category, time and more, slowly began rolling out in April just prior to the Boston Marathon. Users can also create geo-zones for a specific area. The Mount Pleasant police department began using the platform in July. Community members can sign up for alerts, so anytime someone uploads a post in that zone you get a notification such as an email or text message. Similarly, in Huntington Beach, Calif., we have AMBER or community alerts through the city.

Chip Googe, Inspector with the Mount Pleasant Police Department in South Carolina, describes the mapping application as a crowdsourcing platform that allows the community to report incidents or accidents during major events such as the town's July 4 celebration or bridge run, which attracts about 40,000 runners. He also posts information on car fires and traffic accidents.

Creators of the app made two private channels available to the Mount Pleasant Police. The department built a business connection with its loss prevention officers. The private channel will enable law enforcement to communicate quickly with businesses whose employees or customers identify shoplifters and other crimes.

The public already shares information on social networks. Vizsafe wants to aggregate the information to make the safety-related content more valuable and actionable. Interestingly, some tipsters in Mount Pleasant already use Facebook or Twitter, Googe said.

The police agency can also put out notifications on the platform. The Mount Pleasant Police Department uses it to alert the public in the event of an accident or a street or bridge closure, but has yet to receive any tips via the system.