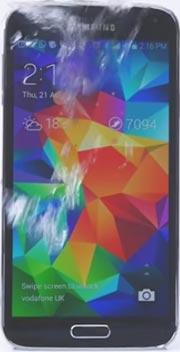 The ice bucket challenge meme apparently has jumped the shark…and then turned around and eaten it. In a matter of weeks we went for cool vids of the rich and powerful getting doused to a massive viral trend, to concerns about the cause getting lost to the trendiness, to a backlash to the backlash.

But I suspect Samsung may have killed the ALS Ice Bucket Challenge with one final bit of branded social intervention that is at once clever and ikky.

So if you haven’t seen it yet, Samsung Mobile UK is riding the trend of bucket challenges by drenching (well, spritzing) the water-resistant Samsung Galaxy 5S. The short video was posted late last week and quickly gathered over 2 million views. The voice assistant shakes off the chill and then calls out models from Apple, HTC and Nokia to take a bath.

The spot is clever for all of about a minute. In that time you can see that it slyly calls attention to its ads elsewhere about the phone’s ruggedness without overtly advertising it. Because it would be tasteless to explicitly advertise a product on the back of a charitable endeavor that has garnered such positive public sentiment.

I will let the social media folks who like to argue such things walk through the usual debate over whether and when brands should insert themselves into cultural conversations. I am not the right one to ask, because my stock answer is -- just about never. Brands, you are not people, so stop pretending to be one in public. A majority of the U.S. Supreme Court is the only entity that seems to think companies are person-like. Otherwise, these maneuvers come off as cloying. This spot is not much to get exorcised about. But it feels just wrong enough to me to wish they hadn’t bothered.

The funny thing is that the spot could have been both clever and laudable with the addition of one missing element -- an actual donation to ALS from Samsung and a call for others to do so as well. They did in fact challenge others to donate in their Twitter feed but only after posting the clip and not including the call to action in the spot itself.

Brands -- you aren’t people, but you can take a few lessons from them. Don’t just draw water from the social pond -- give some back. And try to contain the promotional reflex.