With A Nod To 'Happy Gilmore,' Bob Barker Added Punch To 'The Bold And The Beautiful' 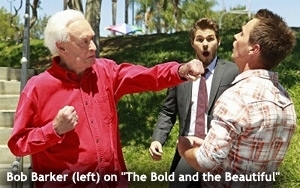 CBS Daytime legend Bob Barker returned to the network’s glitzy soap opera “The Bold and the Beautiful” last week to continue a very serious story line that started back in early May -- the abuse of animals and the need for increased spaying and neutering of pets to reduce the overpopulation of cats and dogs. It was also an occasion for Barker and the show to indulge in some grand physical comedy of the kind not normally associated with daytime drama.

The story line last May found wealthy and powerful publishing executive Liam Spencer, played by Scott Clifton, writing a story about all aspects of the pet overpopulation issue for his very successful magazine. His research included an interview with former “Price is Right” host and long-time animal rights advocate Bob Barker, portraying himself. The story included documentary-like sequences in which Liam and his girlfriend Hope Logan toured the state-of-the-art South Los Angeles Animal Service Center. Watching Scott Clifton and Kim Matula, the actress who plays Hope, as they walked around the vast shelter, it was clear that the actors were very moved by what they saw. The story concluded with Liam and Hope adopting a cat. (In real life, Clifton and his wife took the same cat into their home and named him Walter White.)

That mini-arc played out over several days. Its continuation lasted only one, but it was memorable -- not simply because it continued this very important story but because it included a comic set piece that was more amusing than anything I can recall seeing in a soap opera since the genre’s 80s heyday, when humor was a key element in the most successful daytime dramas. It also tied into a primary storyline that has advanced quite a bit since Barker’s last appearance on “B&B” -- the romantic triangle between Liam, Hope and bad boy Wyatt Fuller.

The story continuation began with Barker visiting Liam in his office and thanking him for the story in his influential magazine. “Because of you many more pets around the world are going to be spayed or neutered,” Barker beamed. “Please keep spreading the message: Have your pets spayed or neutered and remember, some shelters will provide that service for free.”

“Well, if the price is right,” Liam laughed.

A short while later, after Bob had left, Wyatt, who is now married to Hope, barged in and confronted Liam about the cat he had adopted with her. As it happens, Wyatt is allergic to cats, so he wanted Liam to keep it, but Liam said Hope would never give the cat up. Liam then realized Barker had left his tablet in his office, so he grabbed it and went running outside to find Barker before he left the area. Wyatt pursued Liam to continue his anti-cat tirade -- right in front of animal lover Barker, whom Wyatt did not recognize.

During the argument that followed, hothead Wyatt referred to animal lovers like Liam as “stupid” and “wacko.”

Barker bristled. “I think a pet could be your best friend and make you happy,” he told Wyatt. “You look like you could use that. Just remember, help control the pet population. Have your pets spayed or neutered.”

Wyatt wasn’t having any of that. His response was to call Barker a “wacko.”

Barker burst, and the moments that followed paid homage to his iconic scene in the 1996 comedy classic “Happy Gilmore” in which he beats up Adam Sandler. Barker punched Wyatt in the face multiple times then gave him a shot to the gut, followed by another blow to the head that knocked Wyatt to the ground. Then he pushed Wyatt away with his foot and sent the guy rolling down a hill.

“Really?” a dazed Wyatt exclaimed after he reached the bottom.

Darin Brooks, the actor who plays Wyatt, was obviously relishing the opportunity to indulge in a little physical comedy -- something actors rarely get to do on soaps, and something Brooks displayed a fine talent for in the Comedy Central series “Blue Mountain State.”

Barker’s appearances on “The Bold and the Beautiful” continue to illustrate ways in which the few remaining soap operas can mix things up and distinguish themselves, while taking occasional brief breaks from their usual formulaic narratives to surprise viewers and give them something different. In this case an important issue was twice addressed, a beloved performer who was a huge star of daytime television for many decades was given the chance to appear once again on the network he called home for so long, and actors who are generally given very serious material to play were allowed to loosen up and have some fun. It’s good to know that soaps can still engage viewers in surprising ways. And it’s good to know that Barker has still “got it,” as well.