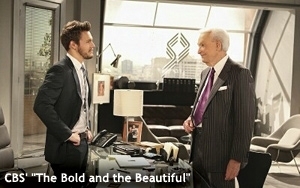 All soap operas past and present have taken great pride in the fact that they often explore social issues in greater depth and with stronger impact than prime-time programs. Their five-day-a-week platform allows them to do so without compromising their ongoing stories of romance, revenge, success, failure, love and lust.

But when it comes to incorporating real life drama into its story lines and putting a message across without interrupting (and sometimes enhancing) the scripted drama at hand, no soap opera comes close to CBS' “The Bold and the Beautiful.” Four years ago this show made history by immersing its lead character, Stephanie Forrester (who has since died of cancer), into the lives of dozens of homeless people in Los Angeles. In a very specific style that blended documentary exposition and camerawork with the show's typically powerful scripted drama and high-end production values, Stephanie talked with several homeless people living on Skid Row and toured an impressive city shelter. The show's executive producer and head writer Brad Bell hired two dozen homeless people to tell their stories to Stephanie on camera and went so far as to employ 30 more as extras and bit players on the show for several months thereafter. This story and the way “B&B” showcased it made the hardships that homeless people live with every day feel profoundly intimate and immediate.

This week, “B&B” has been doing something very similar, and with equal emotional impact: Addressing problems of animal abuse and the overpopulation of cats and dogs, particularly in major cities and urban areas. Wealthy and powerful young publishing executive Liam Spencer has been researching a story for his family's very successful magazine about all aspects of this issue, from puppy mills and breeders to spaying and neutering and rescue adoptions.

The story kicked off -- and caught my attention -- with a guest appearance by CBS legend and former “Price is Right” host Bob Barker, a lifelong animal rights activist. Playing himself, Bob sat with Liam to be interviewed for the story, and with great dignity and wisdom took the opportunity to talk about the importance of spaying and neutering dogs and cats and adopting rescue animals from local shelters.

It was great to hear Bob talk about a subject that has meant so much to him throughout his lifetime. It was similarly sensational just to see him back on CBS, however briefly.

At the end of the interview, Liam invited Bob to join him on a tour of the South Los Angeles Animal Service Center. “If you have some free time you're welcome to … come on down,” he laughed.

In the next day's episode, Liam and his on-and-off-and-on again love Hope Logan were given a tour of that highly impressive facility by Brandon McMillan, a compassionate animal trainer and rescuer and the star of CBS' Saturday morning series “Lucky Dog.” The sequence -- which included brief talks with people who work at the shelter explaining what they do every day and many shots of unwanted cats and dogs -- was informative, enlightening and at times heartbreaking.

The people Liam and Hope talked with included a woman named Shelley who rehabilitates dogs with special needs, three of which were with her. They included Daredevil, a beautiful little black dog that was born without eyes and had suffered considerable abuse before he was brought to the shelter. Shelley explained that the terrified Daredevil used to “scream” whenever he was touched. “He never knew he could be touched without being hurt,” Shelley explained. Happily, Daredevil can now be held and petted without fear.

Watching Scott Clifton and Kim Matula, the actors who play Liam and Hope, process what they were seeing in the shelter, it was clear at times from the expressions on their faces that they were not always acting. As it was for viewers at home, it was deeply upsetting to them to see firsthand that so many animals are in distress. It was also heartening to meet so many heroic and dedicated people who are working to help them.

As Barker told Liam on the previous episode: “Animals can't speak for themselves. They depend on us to protect them.”

The story continues (and concludes) in today's episode, which I have not seen. But I am told that it features an appearance by Los Angeles Councilman Bernard Parks (who was instrumental in the construction of animal shelters in his city) and that Liam and Hope will adopt a cat from the shelter before they leave. Scott Clifton, the actor who portrays Liam, and his wife Nikki actually adopted the same cat in real life and named him Walter White.