A Fond Farewell To Joan Rivers 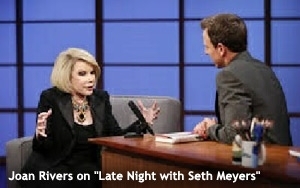 There was special programming that paid tribute to Rivers three nights ago on a number of networks, but there was no new edition of the late entertainer’s unfailingly funny Friday night series “Fashion Police” on E! Her passing seemed incomprehensible; how could Rivers no longer be with us, shocking us and making us laugh as she had with unparalleled consistency for over five decades?

Rivers had down times during her career, but if memory serves they never lasted very long. She could always be found somewhere -- on television and radio talk shows, on the Internet, in bookstores, on reality series, on QVC and certainly on stage. Throughout she played a giant role in the growth and history of television that cannot be understated: As one of the first female comics to entertain the entire country on “The Ed Sullivan Show,” as the first permanent guest host on “The Tonight Show Starring Johnny Carson” (at a time when “Tonight” was the most influential program in the medium, at least on the entertainment side), as the first woman to have her own late-night talk show (even though it wasn’t very good and it didn’t last, her late-night series should be remembered as the project that virtually launched the Fox network), as the Emmy-winning host of her own daytime talk show, as a guest star on countless scripted series (most recently FX’s “Louie,” in a remarkable little tale that ended with the two of them going to bed together).

She was also at the center of one of the most unfortunate episodes in TV history. When she accepted the late-night gig on Fox, Carson refused ever to speak to her again, resulting in her being banned from NBC for more than 20 years until Jimmy Fallon put things right. (Her second appearance on “The Tonight Show Starring Jimmy Fallon” was truly one of the great segments of television this year.)

It has been said that Rivers often went too far with her comedy. I don’t agree, but that’s a matter of opinion. I do believe she went too far when she starred (along with her daughter) in the 1994 made-for-television movie Tears and Laughter: The Joan and Melissa Rivers Story, about the suicide of her husband (and Melissa’s father) Edgar Rosenberg and its traumatic aftermath. But I think that’s the only time I wasn’t fully supportive (as a fan or critic or both) of something she was doing. I even enjoyed her perfectly dreadful attempt at writing and directing a movie, the 1978 comedy “Rabbit Test,” in which Billy Crystal played a pregnant man.

I have had lengthy discussions in recent months about Rivers with executives from NBCUniversal Cable which always came around to the same point: After more than five decades in the entertainment industry Rivers was as relevant now as she had ever been. Her humor was smart and timely on “Fashion Police,” a show I designated this past January as one of the funniest on television. Her Internet talk show “In Bed with Joan” was as enjoyable a diversion as Jerry Seinfeld’s “Comedians in Cars Getting Coffee.” Her observational reality series on WEtv, “Joan & Melissa: Joan Knows Best?” was consistently fascinating on a number of levels. For me, the touch-point of my interest in it came from wondering what motivated Rivers to star in a reality series when she had so much else going on.

During the more than 20 years that I have been a television critic I have met dozens of people who had talked with Rivers one several occasions. I never heard a bad word about her. My own experiences with her further support everything you have been reading these last few days about how friendly she was and how interested she always seemed to be in other people. I first met her in the late Seventies, backstage at a comedy venue in Connecticut. From her I received my first in-person celebrity autograph and a thank you kiss for waiting to meet her. Several years later I returned to that same venue. Her comedy had intensified (I was struck by the number of times she used the word “bitch”), but she was exactly the same after the show as she had been in the Seventies, happy to meet everyone who was willing to wait around for her. A few years later I was seated behind her at the National Board of Review awards. Again, she couldn’t have been nicer.

There were many random meetings at industry events throughout the Nineties and the last decade. In recent years she had become something of a regular at the twice-yearly Television Critics Association tours, always happy to promote her shows on E! and WE, even if that meant just showing up for a lunch or a cocktail reception. I will never forget her taking me aside after talking to a group of critics about “Joan & Melissa” and quietly saying with all seriousness, “No bullshit. I wouldn’t bullshit you. It’s really a very good show.” Even more memorably, at the end of an E! lunch as she walked past another critic and I the other critic pointed to me, and in reference to one of the popular segments on “Fashion Police” asked Rivers, “starlet or streetwalker”? Rivers looked me up and down and replied, “streetwalker” before dashing away.

Those are some of the reasons that Rivers’ passing feels very personal to me. I mention them because it has been abundantly clear in recent days that the loss of this great woman has felt very personal to millions of people. It seems that anyone who ever found themselves anywhere near Rivers has a very positive story to tell.

I have been haunted since word of her passing by something she said on NBC’s “Late Night with Seth Meyers” about a month ago, which I believe may have been her last televised interview. (She was promoting her latest book, her twelfth.)

Meyers listed all of her current projects and then said, “You’re 81! How do you do it? What’s the secret to your success?”

“Not dying,” Rivers said with a smile and a brief thumbs up. “At a certain age you say that’s how old I am and move forward.”

Never one to miss an opportunity to make people laugh, Rivers then added, “I have a tattoo that says ‘Nothing Lasts Forever, Like Sunsets in Sweden and Snack Time with Kirstie Alley.’”