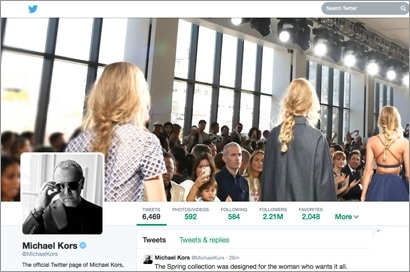 Which labels ruled the runway during New York Fashion Week, earlier this month?

In terms of social engagement, the big winners included established names like Michael Kors and Tommy Hilfiger, along with edgier lines from Jeremy Scott and Alexander Wang, according to fresh findings from social analytics firm Socialbakers.

“As a whole, the fashion industry has adapted to the great potential social media has to share and spread visual content,” said Jan Rezab, cofounder and CEO of Socialbakers. “Compared to last year, we're seeing Instagram rise even more as one of the most useful social networks for this industry."

“It's clear that many fashion brands are taking their social media presence very seriously this New York Fashion Week,” Rezab added, referring to Wang and other big gainers.

Generating more buzz than their fashionable peers, Jeremy Scott, Calvin Klein and Alexander Wang attracted the most mentions on Twitter -- 22,827, 15,835, 13,837 -- during the period.