Narrators And Internet Geniuses: Decoding The 'Mysteries' Of The New Fall Season 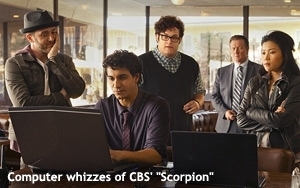 What's new in the new fall season?  Not much, when you get right down to it.

With the new network TV season set to begin officially next week (and already partially underway this week), here are a few things I observed while watching the fall pilots over the last few weeks.  Consider yourself warned …

The Internet will save us.  This season, the Internet -- either as a platform for social interaction (i.e., dating and commenting on a date and its aftermath), or as a resource for curating vital information in milliseconds in order to save the planet -- takes center stage.

In at least two ABC comedies, social media and cell phone use are positioned as “characters” rivaling their human users in importance. One of the shows is “Selfie,” about a young woman whose self-absorption actually threatens to derail her social life, rather than enhancing it. The character’s name is Eliza Dooley and she’s going to be mentored by a boss named Henry. Yes, it’s “My Fair Lady” adapted for a network sitcom in the Internet Age. And it’s not a bad show, except for an icky scene we could have done without in the series pilot (see “That’s grotesque,” below).

In the other ABC social-media comedy, “Manhattan Love Story,” two 20-somethings (or maybe they’re 30-something; when you’re 50-something like me, it’s hard to tell) meet cute and then chronicle their relationship and update their dating status on Facebook. When I watched the pilot, I jotted down this question in my notes: Is this an entire show about texting? It seems so.

For saving the world, or at least a single city, the Internet comes in handy for the young geniuses of CBS’s “Scorpion” -- a team of misfits who are barely 20 years old but possess so much collective knowledge about such things as explosives, weapons systems, architecture, security alarm systems and the like that the government hires them to assist in the continuing battle to prevent bad people from carrying out their nefarious threats.

The thing that always strikes me as wrong about shows like this: How do these people find such complicated information -- about the floor plans of buildings, for example -- in mere seconds (enabling them to prevent attacks in mere seconds too)?  Meanwhile, for the rest of us, most of our Google searching yields everything but the thing we wanted to know.

Beware the dreaded narrator.  This is a device I have complained about for years, but to no avail (which is the usual result for me): The narrator whose world-weary voice is heard at the outset of a show (more often than not a comedy series) in order to explain the whole thing to you. You know the drill: “My name is [blank],” says the Dad/Mom/Single Career Girl in a Big City. “This is my [house, apartment, street]. These are my [friends, kids, co-workers].” Etc., etc., etc.

Instead of having a narrator spoonfeed me the details of a new show and its characters, locale and premise, I prefer it when a show reveals its scenario and setting gradually -- through means of storytelling other than flat-out narration. As one older veteran of the TV business once said to me: “It’s television -- you have to give them vision!” What he meant was: “Show” me, don’t “tell” me.

Nevertheless, a narrator is heard in at least eight of the new shows -- five comedies and three dramas: Comedies -- “The McCarthys” (CBS); “Selfie,” “Manhattan Love Story,” “Black-ish” (ABC); and “A to Z” (NBC); and dramas -- “Forever” (ABC), “Constantine” (NBC) and “Red Band Society” (Fox). It should be noted that in “Red Band Society,” which premieres tonight (Sept. 17), the narrator is a little boy in a coma.

Imitation is not necessarily flattering.  If you love “Homeland,” you might like “State of Affairs” on NBC. Or you might not.  In “State of Affairs,” Katherine Heigl plays a CIA operative who is so much like the Carrie character played by Claire Danes on “Homeland” that you might wonder how they got away with it.

And on Fox, the series called “Gracepoint,” about the terrible murder of a small boy in a tiny seaside town, will remind you of “The Killing” on AMC. And if memory serves, “The Killing” was not exactly beloved. The best feature of “Gracepoint”: Anna Gunn of “Breaking Bad” is the star of the show, and she’s terrific.

That’s grotesque.  Several scenes and scenarios in the new fall pilots stood out for all the wrong reasons.  In a nutshell, they’re gross.

The most violent scene in all the shows was in the CBS drama called “The Stalker,” in which an unidentified man drenched a woman’s car with gasoline and set it on fire while she sat helplessly screaming inside of it and ultimately was burned alive.

Meanwhile, the aforementioned ABC sitcom “Selfie” was marred by a lengthy comedic sequence that had Eliza violently puking into an air-sickness bag in an airplane, and then having the bag rupture and splatter its contents all over her. True, it was not nearly as disgusting as the immolation scene on “The Stalker,” but still …

Finally, on “The Mysteries of Laura” on NBC (and having a preview tonight -- Sept. 17), Debra Messing plays a New York City police detective whose domestic life is a mess. She’s in the midst of a divorce and also trying to control her twin boys (who look to be 10 or 11 years old) who are being thrown out of their private school for “fecal fingerpainting.” This is how the school’s director describes the boys’ behavior in one scene in which he informs their mother that her boys “defecated” in his office. Later in the show, the two boys are seen playfully urinating on each other in Central Park. Yes, you read that correctly.

Get these kids into therapy -- and maybe this show’s writers too.