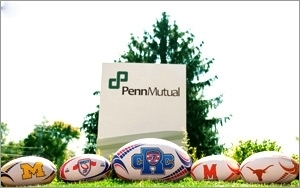 Perhaps we need a new sport with an oblong ball. How about rugby? It is growing in popularity and the timing is right. Penn Mutual Life Insurance Company sees the opportunity. The company has partnered with United World Sports and NBC Sports Group for a three-year title sponsorship for the Collegiate Rugby Championship, which involves a version of the game called Rugby 7s, with seven players per side instead of 15. Rugby 7s is also going to be in the summer Olympics in 2016 for the first time in 84 years.

Jonathan First, president of United World Sports, owner and operator of the Collegiate Rugby Championship as well as the USA Sevens International tournament in Las Vegas, said in a statement that the sport is the fastest growing in the U.S. and that the partnership helps legitimize the sport as a bona fide marketing channel "With the same cache of soccer, appealing to an American market comprised, in part, of business leaders and decision makers."

Eileen McDonnell, Penn Mutual’s chairman, president and CEO, said the deal provides a thematic connection around protection and doing more in life, and "Also gives us the opportunity to attract new talent by gaining exposure to the student athletes of major national colleges and universities."

In the Olympics the U.S. will defend its gold medal from the 1924 Olympics, and the Penn Mutual Collegiate Rugby Championship is, per a release, part of an effort to build rugby talent in preparation for the Games. Among the 20 collegiate teams competed for the title are Penn State, Notre Dame, Texas, Michigan, and reigning national champion, the University of California Golden Bears. Beginning in 2015, a portion of Penn Mutual’s sponsorship investment will be awarded to the winning team, the proceeds of which will be used to build the team’s rugby program on-campus, per the insurance company.

In any case, rugby union may grow in the U.S. because the sport returns to the next Olympics, and because USA Rugby wants to host the 2018 Rugby World Cup Sevens. Also, USA Rugby cites statistics showing that attendance at the USA Sevens tournament has grown 15,800 in 2004, to 52,000 fans in 2011. And major matches, whether friendliest with international teams or U.S. teams, regularly draw over ten thousand.

A 2011 study commissioned by the Sporting Goods Manufacturers Association Research said that in that year there were 1.13 million rugby participants in the U.S. with 43% having average household income of $75,000 per year, with 55% having a college degree or higher.  The strongest markets are in East and West Coast states.