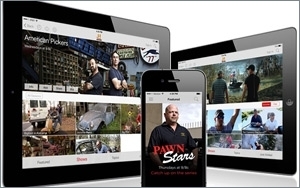 Pardon my shameless glee, but I have been waiting for this moment for a decade. When I interviewed the early streaming video wunderkinds in the late 90s and early 00s I ended with a standard question about their business model. “The end game here is really for all this video to migrate back to TVs via digital distribution, though, right?” They were always loath to admit that in their hearts they weren’t counting on the desktop experience to achieve profitability.

My point, then and now, is that the emergence of video online surfaced one of the dirty little secrets of the Web: it is probably the most inconvenient, uncomfortable, and unfocused media consumption platform humans ever invented. Sitting at a desk, even glaring over a laptop keyboard to the LCD balanced on your tummy, with countless other open windows vying for your attention, is no way to experience media. The media experience of the Web sucks -- it always has. It has been apparent to me since the late 90s when ambitions for quality digital content emerged, this stuff wanted to get off the desktop as soon as it could.

In 2001, the most obvious place for desktop media to flee seemed back to the TV. Few of us were seriously thinking that a smartphone or some more palatable version of Bill Gates’ tablet PC would eventually become the haven digital media had been waiting for. But the scale and velocity of the migration of consumption habits to devices is a simple matter of pent-up demand for something even marginally better than sitting at a desk and watching video.

And so I gloat a bit at A&E Network’s news that they are serving more videos to apps on devices and to over the top set-top boxes than they do on the Web. The company announced this week its apps for History, Lifeltne and other TV Everywhere offerings for iOS, Android, Roku, Apple TV, Xbox 360 and Kindle Fire have gotten downloaded 22 million times. While download totals don’t really tell us much about actual monthly reach and usage, A&E does say that 57% of videos are now streaming across these post-PC platforms, leaving only 43% viewed on the Web as we have known and suffered it for lo these many years.

Sorry, that is me gloating again.

A&E gives us some granularity here that is revealing, even if they don’t actually come out and say what share is going to device vs. over-the-top (OTT). They do say that on the mobile side 73% of downloads are coming from iOS, compared to 21% to Android and 6% to Kindle Fire.  That last number is especially revealing to me, as it suggests the Kindle Platform is accumulating a base of users who are moving beyond the Kindle’s book-reading legacy and starting to use the devices more broadly. I have to say that the larger size fire review unit I have had was an excellent media consumption device -- with a crisp HD screen and good weight for extended viewing.

Moreover, when it comes to devices, mobile does not mean really mobile. A&E says that 88% of the videos on all mobile platforms are using WiFi connections, most likely in the home and during prime time. In fact, peak mobile video viewing occurs between 10 and 11 p.m. each night.

The emerging OTT platforms are also showing curious behaviors that vary by device. For instance, Apple TV is responsible for 47% of A&E OTT app users, compared to 39% who download it to Roku and 14% to Xbox. But when it comes to actual video views, Roku is responsible for 53%, compared to 34% for Apple TV and 13% for Xbox. And yet the Xbox leads in serving video views per user -- 292$ more than videos served per user on Apple TV. Roku trails the game console only by 21% however. Roku announced last week that it has sold over 10 million OTT players thus far. The company claimed that Roku users are voracious, responsible for 37 million hours of video a month compared to Apple TV’s 15 million hours, Chromecast’s 12 million and Amazon fire TV’s 6 million.

Clearly, different types of video consumption behavior are endemic to various platforms. And each unit will appeal to different demos.

Regardless, online video usage is making a run for the door now that it has a couple of real getaway options. the only question now is exactly how much entertainment and informational media consumption really happen anymore on the desktop in a few years. At some point the desktop Internet experience, while not likely to become obsolete, will be identified with mostly with productivity and their relevant modes and times of day. Which is to say, the desktop PC will return to it original purpose -- as an office machine.