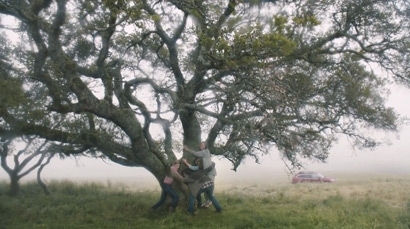 Subaru can joke at its own expense and get away with it. It helps that the brand has a razor-sharp understanding of its owners. Some weeks ago, for example, the automaker launched a campaign for the 2015 Legacy sedan that featured a witty ad that pretty much told the truth about the hassles of owning a car, Louis C. K. style (if Louis C. K. were six years old), while managing to tout the Legacy.

The company’s new campaign for the 2015 Outback keeps the wry humor intact, delivering a message about adventure driving, Subaru style, while toying with the idea of Subaru-owners having an inner-flower child.

The effort, via Carmichael Lynch, includes two national television spots helmed by Lance Acord, who worked on "Lost in Translation" and "Being John Malkovich." In one of the ads, a family meanders through back roads on a trip to visit grandma's "Summer of Love" past. Grandma is in the back seat reminiscing to her granddaughter while mom and dad are up front by turns amused and worried by what she's telling their daughter about the hippy life. In the end they all wind up hugging a tree. The ad seems both to poke fun at Subaru’s iconography, and to say, more universally, that everyone has their tree.

Jim Sanfilippo, automotive marketing polymath and former director of Hyundai’s AOR Innocean USA, tells Marketing Daily that Subaru’s advertising gets to the point of what the brand represents and who its owners are. “There’s an element of surprise and cleverness here that will strike home for just about everyone, because everyone is holding on to something.”

He says the ad, like the Legacy spot mentioned above, also works because it reverses a cliche in car advertising where parents are the practical ones. “In this spot it’s the children who are the practical Subaru owners; at the same time there is beauty in the grandmother/granddaughter relationship,” he says, adding that the casting works especially well. “You just know [the grandmother] was in the Peace Corp. Subaru is a company that has been talking to their owners for a long time; someone obviously did their homework.” The spot was shot in a Northern California spot chosen because it looks like the bucolic landscape near Woodstock, N.Y., where a certain music festival took place once.

In the second spot a dad drives his pre-teen around to some stunning American West locales, such as the Mariposa Grove in Yosemite Park, what looks to be Zion National Park, and finally the National Bison Reserve in Montana. The kid's response is the predictable "meh" of the digital native who is more interested in the virtual than real world. "That's not so big," he says about a massive sequoia. A canyon gets a shrug. It takes a face-to-face confrontation with a bison to get him off his smartphone.